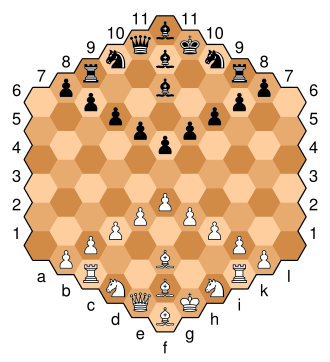 The term hexagonal chess designates a group of chess variants played on boards composed of hexagons. The best known is Gliński's variant, played on a symmetric 91-cell hexagonal board.

Since each hexagonal cell not on a board edge has six neighbor cells, there is increased mobility for pieces compared to a standard orthogonal chessboard. (For example a rook has six natural directions for movement instead of four.) Three colours are typically used so that no two neighboring cells are the same colour, and any game piece that is colour-restricted (such as the bishop in orthodox chess) usually comes in sets of three per player in order to maintain the game's balance. Many different shapes and sizes of hexagon-based boards are used by variants. The nature of the game is also affected by the 30-degree orientation of the boardcells. (For example, when the sides of hex cells face the players, pawns typically have one straightforward move direction. If a variant's gameboard has cell vertices facing the players, pawns typically have two oblique-forward move directions.) The six sidedness of the symmetric hexagon gameboard has also resulted in a number of three-player variants.

The first applications of chess on hexagonal boards probably occurred mid-19th century, but two early examples did not include checkmate as the winning objective. More chess-like games for hex-based boards started appearing regularly at the beginning of the 20th century. Hex-celled gameboards have grown in use for strategy games generally; for example they are popularly used in modern wargaming.

Gliński's hexagonal chess, invented by Władysław Gliński in 1936 and first launched in Britain in 1949, is probably the most widely played of the hexagonal chess variants. The game was popular in Eastern Europe, especially in Gliński's native Poland. At one point there were more than half a million players, and more than 130,000 board sets were sold.

The game is played on a regular hexagonal board with 91 hex cells having three colours (light, dark, and mid-tone), with the middle cell (or "hex") usually mid-tone. The usual set of chess pieces is increased by one bishop and one pawn. The board has 11 files, marked by letters a -l (letter j is not used), and 11 ranks (which bend 60° at file f). Ranks 1-6 each contain 11 cells, rank 7 (filled with black pawns in the initial setup) has 9 cells, rank 8 has 7, and so on. Rank 11 contains exactly one cell: f11.

The diagrams show how each piece moves. As in chess, the knight can jump over other pieces. A player's three bishops, relegated to different colours, can never meet. The queen moves as rook plus bishop. There is no castling in Gliński's hex chess.

Pawns move straight forward and capture obliquely forward to an adjacent cell (shown as crosses in the diagram); the pawn's capturing move direction is not diagonal like the bishop's move, as is the case in standard chess. All pawns can make a double step from their starting cells. If a pawn captures from its starting cell in such a way that it then occupies a starting cell of another pawn, it can still make a double move. For example, if the pawn on e4 were to capture a black piece on f5, the pawn retains the option to move to f7. The white pawn in the middle file (cell f5) cannot make a double step in the initial setup, since the target cell is occupied (a black pawn is on f7), but the double-step move could be made later when the cell is empty. En passant captures are also possible: for example, if the black pawn on c7 in the diagram moves to c5 in a single move, the white pawn on b5 can capture it: bxc6. Pawns promote on the last cell of a file; white pawns promote on the cells in the diagram marked with stars.

Stalemate is not a draw in Gliński's hex chess, but is still counted less than checkmate. In tournament games, the player who delivers stalemate earns ¾ point, and the stalemated player (the player without a legal move) receives ¼ point.

A numeric (or international) notation exists. Every other detail is exactly as in ICCF numeric notation, except there is no castling. 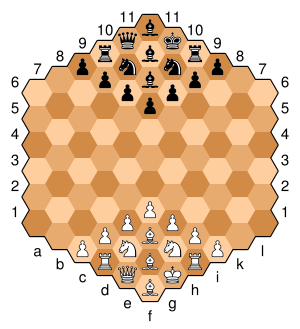 In 1978-79 Dave McCooey and Richard Honeycutt developed another variation of hexagonal chess very similar to Gliński's, having four differences: the starting array (including seven pawns per side instead of nine); the pawn's capturing move; pawns on the f-file are not permitted an initial double step; and stalemate is counted as a draw (players receive half a point). 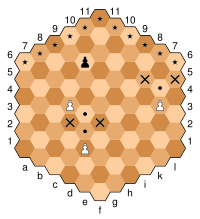 The diagram at the left shows the pawn's move in McCooey's variant. The capturing move corresponds to a bishop's move: e.g. if the black pawn on e8 advances to e6, the white pawn on d5 may capture it en passant.

In the starting position, the f-file pawns may not advance two steps like the other pawns. The f-pawns are also not defended in the opening array, and in fact smothered mate would result if it were captured by a knight, although this possibility would rarely occur in practical play.

These endgame studies apply to both Gliński's and McCooey's hexagonal variants: 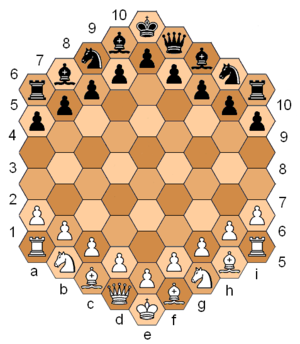 Invented by Soviet geologist Isaak Grigorevich Shafran in 1939 and registered in 1956. It was demonstrated at the Worldwide Chess Exhibition in Leipzig in 1960.

The board is shaped as an irregular hexagon with nine files and ten ranks, comprising 70 hex cells as opposed to 91 in Gliński's board. The files are labelled a to i; the oblique ranks running diagonally from 10 to 4 o'clock are numbered 1 to 10. For example (see diagram), the two kings start on e1 and e10; White's rooks start on a1 and i5, and Black's rooks start on a6 and i10. Each player calls the left-hand side of the board his "queen's flank" and the right-hand side his "bishops' flank"; note that they do not correlate (White's queen's flank is Black's bishops' flank).

The pieces and pawns move and capture exactly as in McCooey's hex chess, with the exceptions of castling, and pawn first-move options. In Shafran's hex chess, a pawn's first move can take it to the middle of the file. (So, the d-, e-, and f-pawns may make a triple-step initial move; the b-, c-, g-, and h-pawns may make a double-step initially; and the a- and i-pawns can advance only one step.) When a pawn makes a multi-step move, it is subject to capture by en passant. 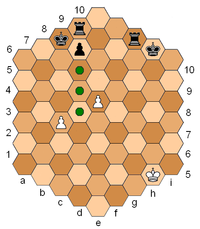 Castling is possible in Shafran's chess (unlike Gliński's or McCooey's). The usual restrictions apply. It can be long or short castling in either direction. The notation consists of Q- or B- (indicating whether the queen's or the bishops' rook is used) followed by 0-0-0 (long castling: the king moves next to the rook and the rook jumps over it) or 0-0 (short castling, the king moves one cell less distance). In the diagram, the black king on h10 has castled long queenside (1... Q-0-0-0) and the black king on c8 has castled short bishopside (1... B-0-0). Castling does not typically increase the king's safety or make the rook more active, but it is present in the game nonetheless, for completeness.

Stalemate is a draw in Shafran's hexagonal chess. 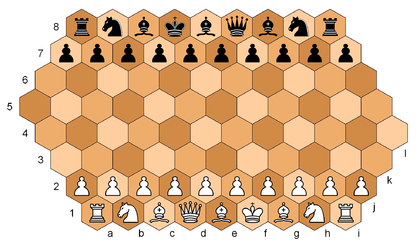 Invented by Yakov Brusky in 1966. The game features an irregular hexagon board comprising 84 cells. Piece movement rules are the same as Gliński's hex chess, except for the pawns, of which there are ten instead of Gliński's nine. Other differences from Gliński's: castling is permitted; kings start on opposite wings of the board; and draws are worth half a point.

A pawn moves forward to an adjacent cell, or (as its first-move option), two cells forward in the same direction.

If an enemy man blocks a pawn from moving in one of its two forward move directions, then that pawn is automatically blocked from moving in the other direction as well. But if the blocking man is a friendly piece the effect is not the same - the pawn is still free to move in the unblocked direction.

A pawn captures diagonally forward, to a same-colour cell on which the pawn stands. But only a pawn on its initial cell may capture straight forward; once a pawn has moved, it may capture only to the sides. (So, unless it is a wing pawn, an unmoved pawn has three capturing possibilities; a pawn that has moved, two.) 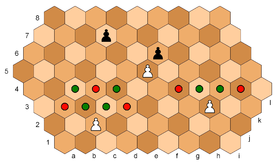 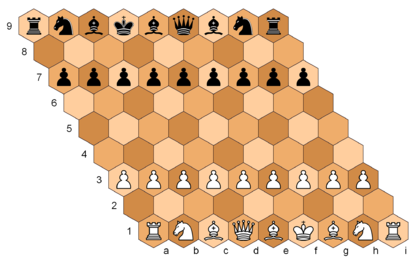 Invented by Helge E. de Vasa in 1953 and first published in Joseph Boyer's Nouveaux Jeux d'Echecs Non-orthodoxes (Paris, 1954). The rhombus-shaped board comprises 81 hex cells with initial setup as shown in the revised form of the game. Rules for piece movement are the same as Gliński's variant, except for the pawns. Castling is permitted, and kings start on opposite wings of the board.

Pawns start on the players' third ranks. A pawn moves forward to an adjacent cell, or (as its first-move option), two cells forward in the same direction. A pawn captures diagonally forward to the sides, to a same-colour cell on which the pawn stands. 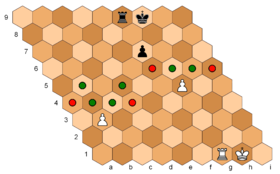 The first published hexagonal chess variant was the commercial game Hexagonia, invented in 1864 by John Jaques & Son. The board has 127 cells; each side has 1 king, 2 cannons, 4 knights and 8 pawns. The winning objective is not checkmate, but rather to safely bring one's king to the central board cell.

In 1998 Derick Peterson invented Grand Hexachess. In this variant the board is placed horizontally, with each player's pieces on opposite sides. Pawns then have two possible forward moves (forward left and forward right) and three possible diagonal capturing moves (one directly in front). Precisely this was the motivation for this design, considering the fact that usually the hexagonal chess pawn is the only piece that does not increase its mobility.

C'escacs 2007 is a Grand Gliński chess of 169 hexes. It introduces a dragon (empress), two pegasi (princesses) and two almogavars to the Gliński's set. Pawn's moves are increased to allow forward 60° moves, and captures are the same way McCooey's chess. The scornful pawn capture additional rule counterbalances the excessive pawn mobility.