Sannin shōgi (三人将棋 three-person chess), or in full kokusai sannin shōgi (国際三人将棋 international three-person chess), is a three-person shogi variant invented circa 1930 by Tanigasaki Jisuke and recently revived. It is played on a hexagonal grid of border length 7 with 127 cells. Standard shogi pieces may be used, and the rules for capture, promotion, drops, etc. are mostly similar to standard shogi. (See that article for an explanation of these terms.) While piece movement differs somewhat from standard shogi, especially in the case of the powerful promoted king, the main difference in play is due to the rules for voluntary and mandatory alliance between two of the three players.

The board is thought to have originally been in the shape of an equilateral triangle bordered by three rectangles which contained the players' home territories and promotion zones. However, in terms of movement this was equivalent to a hexagon, and the modern form of sannin shogi is played on a hexagonal board, rather like the central portion of a Chinese checkers board. The three players occupy non-adjacent sides of the board; the three ranks nearest to them are their territories and their opponents' promotion zones. The 'international' arena inside the three territories remains triangular.

The board is presented here with substitutions by standard shogi pieces; for the names actually used, see below.

The central cell is called the Pleasure Garden and is an additional promotion zone, except for the king. It is drawn with a heavy or double border or otherwise made visually distinct.

In the modern game, standard shogi pieces are used. Each player wields 18 pieces, the standard shogi set of 20 less one knight and one pawn. The pieces face away from the players: That is, they point toward the gap between the opposing players' territories.

The three players represent three countries, and are called First, Middle, and Last. If two players start the game as allies, the remaining player is automatically First. Otherwise any random method may be used to determine the order of play. Play then precedes clockwise from First to Middle to Last. 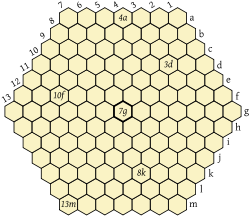 The ranks are numbered a-m, and the files slanting left 1-13.

Standard shogi notation is used, with allowance made for the shape of the board. Numbering the ranks poses no problem: They are the rows that are horizontal from the viewpoint of Middle, and are given the letters a through m from top to bottom, with g being the central and widest rank. That is, the territories of First (top right player) and Last (top left player) span ranks a through i, and that of Middle (bottom player) occupies the three ranks k, l, m.

The numbered "columns" are the rows that run from top left to bottom right from the viewpoint of Middle. They are given the numbers 1 to 13 from right to left, with 7 being the central and longest column. That is, First occupies columns 1 to 3, while the territories of Middle and Last span columns 5 through 13.

Movement on a hexagonal board

Because each cell of a sannin shogi board is a hexagon rather than a rectangle as in other shogi variants, the pieces will necessarily move differently. Instead of four faces with adjacent squares and four corners, for eight directions total, there are six each for a total of twelve. However, except for castling and the promoted king, which is reminiscent of the queen of Western chess (indeed, it moves like the queen in Gliński's hexagonal chess), the pieces are fair analogues of their standard-shōgi counterparts.

There are two kinds of paths along which pieces move:

The pieces and their moves

Tanigasaki named the pieces after elements he considered basic to international affairs. However, they parallel the pieces of standard shogi, which are substituted for them in modern play; since the reader is likely familiar with these already, this article will use the piece names from standard shogi. 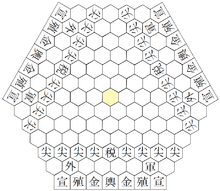 Summary of the pieces and their promoted movements

The king (K; "public opinion" in Tanigasaki's nomenclature) may step to any adjacent (orthogonal) cell (1, 3, 5, 7, 9, or 11 o'clock). A king may also castle on its first move, subject to certain restrictions (see below).

A promoted king (+K; "rising sun" or "sunlight") may range along any of the twelve orthogonals or diagonals.

A promoted king also gains the power to "kill by illumination": It may capture, without moving, any pieces that it could capture if it were to move. That is, it may capture more than one piece, but only one piece in any direction and only if they are unprotected by either opposing player. (It is not clear if it must capture all such pieces, or if it may be selective.) It cannot combine this power with a physical move.

A king automatically promotes if the other two players enter into an alliance. A non-allied king (promoted or otherwise) that reaches the central cell of the board (the Pleasure Garden) wins the game.

The rook (R; "military education") may range along one of the forward or side orthogonals (9, 11, 1, or 3 o'clock), or along the diagonal directly backwards (6 o'clock).

A promoted rook (+R; "heroism") has a more powerful retreat: It may range along any one of the six orthogonals.

The bishop (B; "diplomacy") may range along any one of the six diagonals, and can reach only one-third of the board. (Compare Gliński's hexagonal chess, which has three bishops for this very reason.)

A promoted bishop (+B; "witchcraft") gains the power to step to any adjacent (orthogonal) cell. That is, it may move as a bishop or as a king, and can therefore reach every cell on the board.

The gold general and the knight

Neither has the ability to promote.

A promoted silver (+S; "treasure") gains the power to range along the forward and rear diagonals (12 and 6 o'clock).

The lance (L; "propaganda") may range along either of the two forward orthogonals (11 or 1 o'clock). As a consequence, it may run out of room to move, and will thus be required to promote so that it can move further, although it is always advantageous to promote a lance.

A promoted lance (+L; "transformation") gains the power to range along the rear orthogonals (5 and 7 o'clock) as well.

The pawn (p; "colonist" or "pioneer") may step to either of the two forward orthogonal cells (11 or 1 o'clock). As a consequence, it may run out of room to move, and will thus be required to promote so that it can move further, although it is always advantageous to promote a pawn.

A promoted pawn (+p; "dollar") moves like a gold general.

Capturing is done by displacement as in standard shogi. The one exception is the power of "illumination" of the promoted king.

A piece may be captured regardless of any alliance the mover may have with its owner. A castling king may capture as any other moving piece does.

Captured pieces are truly captured in sannin shogi. They are retained "in hand", and can be brought back into play under the capturing player's control. On any turn, instead of moving a piece across the board, a player can take a piece he has previously captured and place it on any empty cell, facing away from himself. The piece is now part of the forces controlled by that player. This is termed dropping the piece, or just a drop.

However, unlike in standard shogi, there being no proper files on a hexagonal board, there is no limit on the number of pawns per file. The restriction against dropping on the far rank (row a in the case of Middle) applies only to pawns and lances, as all other pieces can move from that position. 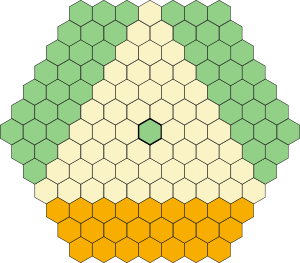 On its first move only, a king may jump to any vacant or enemy-occupied cell within its territory. There are two limitations to castling:

Promotion rules are similar to standard shogi, except for the larger number of promotion zones and the restriction against allied players promoting.

There are three promotion zones: Both of the opposing player's territories, plus the Pleasure Garden (the central cell of the board). In the case of the latter, only moves into or out of the Pleasure Garden are promotable moves: Passing through the cell does not count.

Unlike standard shogi, the sannin shogi king can promote; indeed, when an alliance is formed, the non-allied king is automatically promoted. (However, a king cannot kill by illumination when it promotes. That requires an additional turn, as promotion does not take effect until the end of the promoting move.) When using standard game pieces, promotion entails turning the king blank side up.

Checkmate and winning the game

A player may not move into check or remain in check, even check by an ally. Likewise, a player may not check or checkmate an ally, and each player regardless of alliance must defend against check or threat of checkmate on the next move. (That is, if Middle and Last are allies, and First places Middle in check, Middle must answer the threat, even if he knows or thinks Last will come to the rescue.)

A player loses the game upon checkmate, and is not given the opportunity to resign on his next turn. (That is, if Middle and Last are allied, and First checkmates Middle, the game is over, regardless of whether Middle or Last recognize this and resign.) When mated, all the player's pieces are removed from the board and from the game: They are not captured by the mating player. Play then shifts to the mating player, regardless of whose turn it would otherwise have been.

There are three ways to win sannin shogi:

Repetition of board positions is not allowed. Unlike standard shogi, it is the player who starts the repetitive sequence who must vary the move.

There are no rules for various rare eventualities in sannin shogi, such as draws or revealed checkmate between allies.

Two players may team up against the third, forming an alliance. They may attack each other, but not place each other in check until the third player is defeated, at which point the alliance is annulled. They may not move each other's pieces.

Allies may attack each other to gain pieces-in-hand for drops, or to weaken each other in anticipation of the two-player end game. However, if either ally is checkmated by the third player, both lose, so these are dangerous tactics.

An alliance may be entered voluntarily before the start of the game. However, if two players gang up on the third at any time during the game, subject to the following definitions, an alliance is automatically formed. An alliance may not be broken except by defeat of the non-allied player.

There are two types of coordinated attack that force an alliance:

Material loss is defined as any exchange that materially benefits the attacking player. This includes check, threatened checkmate on the next move, threats against undefended pieces (something for nothing), and threats by less valuable (weaker) pieces on defended but more valuable (stronger) pieces (uneven exchange).

Rules that change in an alliance

Several rules that change or come into force when an alliance is made have been mentioned above:

Here are the first six rounds of a game played at a meeting of the International Shogi Research Group on 28 May 1932. John Fairbairn describes some of the moves as "strange" considering the professional level of the players.

The game began without an alliance.

Other version of Three handed shogi

This version of Sannin shogi was devised in 2013 by Dongyeon Park.

Each side places his pieces in a trapezoid arrangement, as shown below.