Three-player chess (also known as Three-handed, Three-man, or Three-way chess) is a family of chess variants specially designed for three players. Many variations of three-player chess have been devised. They usually use a non-standard board, for example, a hexagonal or three-sided board that connects the center cells (board "squares") in a special way. The three armies are differentiated usually by color.

Three-player chess variants (as well as other three-player games) are the hardest to design fairly, since the imbalance created when two players gang up against one is usually too great for the defending player to withstand. Some versions attempt to avoid this "petty diplomacy" problem by determining the victor as the player who first delivers checkmate (with the third player losing in addition to the checkmated player). Other solutions have been tried as well. 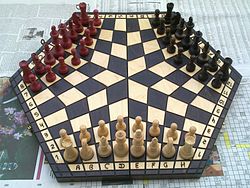 A regular hexagon 96-cell board is a frequent choice by inventors of three-player chess.

Some variants use a special hexagonal board with quadrilateral cells (see example in the photo):

Other boards with quadrilateral cells 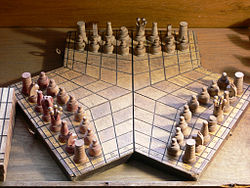 Some variants have used other board forms with quadrilateral cells:

Some variants use a board with hexagonal cells. Usually three bishops per side are included, to cover all cells of the hex playing field. Pieces move usually as in one of the versions of hexagonal chess:

The introduction of a third player drastically alters the style of play, even when standard pieces are used. Many chess openings are useless due to the extended board and third player. Each player must think twice as far ahead - anticipating the moves of both opponents, with the added complexity that the next player may move to attack either opponent.

If a player trades off pieces with a second player, the third player benefits. Hence, players will be more reluctant to make trades. Players often avoid such trades so as to carry out other strategies.

The introduction of the 'extra' move by the third player can introduce situations of deadlock, for example, if a white piece is undefended and simultaneously attacked by both black and red pieces. Black cannot take the white piece, since Red would then capture the black piece next turn. Thus the black and red pieces are both simultaneously attacking the white piece and defending it from attack by the other player. In similar situations, a piece can move quite safely to a square where it is attacked by both opponents, since neither opponent would take the piece and risk capture by the third player.

In games where the third player loses as well as the checkmated one, players must concentrate not only on their own attack and defense, but also on preventing the two opponents from checkmating one another. A player can take advantage of one opponent's position to checkmate the other, but must be careful that the third player does not checkmate first. White could checkmate Red, only to have his piece captured by a black piece, which checkmates Red. In this situation, White would lose since Black delivered the final checkmating move. This strategy also applies to games which give the checkmating player command of the checkmated opponent's pieces - a player who allows the second player to checkmate the third would surely go on to lose due to the increased power of his remaining opponent, now armed with the third player's pieces.