Game of the Three Kingdoms 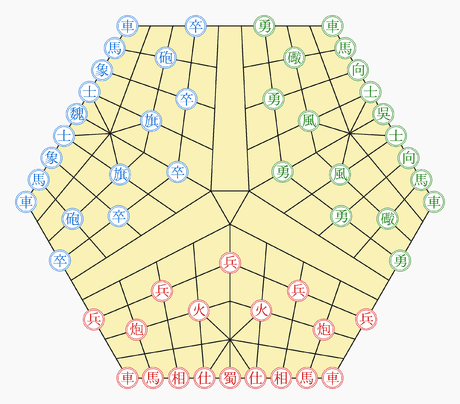 The diagram shows all the usual xiangqi pieces, except generals are replaced by the kingdom names Wei (魏), Shu (蜀), and Wu (吳) representing the three rival emperors. The Green player has additionally its own distinctive symbols for its elephants (向 xiang ), cannons (礮 pao ), and soldiers (勇 yong ). The bannermen pieces (if used) start on the upper corner points of the players' 3x3 palaces.

Game of the Three Kingdoms (Chinese: 三國棋, p Sān-guó-qí ; also called Sanguo Qi, Three Kingdoms Chess, or Three-Handed Xiangqi) is a three-player chess variant of the game xiangqi ("Chinese chess"). The game symbolizes the Three Kingdoms period war (221-264 AD) between the rival states Wei, Shu, and Wu, each vying for control of China after the fall of the Han Dynasty.

The period of origination of Sanguo Qi is disputed and either belongs to the Southern Song Dynasty (1127-1279 AD) or the Qing Dynasty (1644-1911 AD). The two original Chinese texts which described the game are lost. 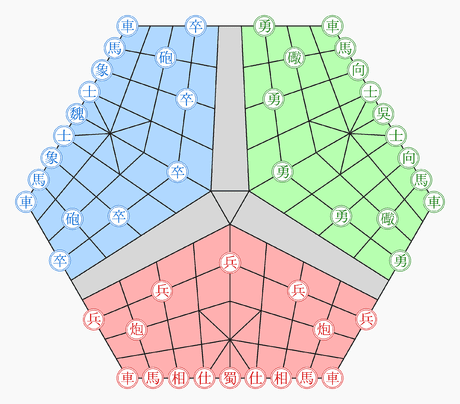 The diagram shows colored kingdoms for clarity (Wei/Blue, Shu/Red, and Wu/Green). This play setup is without the bannermen pieces, which are optional.

The three kingdoms Wèi (魏), Shǔ (蜀), and Wú (吳) are represented by colors blue, red, and green, respectively. Each player controls all the standard xiangqi pieces, with each general represented by the letter of its respective kingdom. In addition, each player controls two bannermen pieces: "flag" (旗 qí ) for Wei/Blue, "fire" (火 huǒ ) for Shu/Red, and "wind" (風 fēng ) for Wu/Green. The use of bannermen is optional - Game of the Three Kingdoms is also played without them. A bannerman moves like an extended xiangqi horse: two steps orthogonally, then one step diagonally outward, with no jumping.

Checkmate and other conventions are the same as in xiangqi, except that after a checkmate occurs, the mated general is removed from the game, and the player who delivered the checkmate appropriates the mated player's remaining pieces for his own use. The last surviving kingdom (general) is the winner.

It may be necessary or desirable to add further play conventions for completeness: 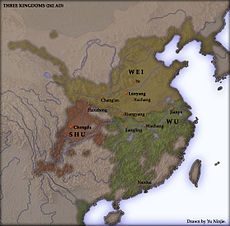 The Three Kingdoms in 262 AD, on the eve of the conquest of Shu