Chinese checkers (US spelling) or Chinese chequers (UK spelling) is a board game of German origin which can be played by two, three, four, or six people, playing individually or with partners. The game is a modern and simplified variation of the American game Halma.

The objective is to be first to race one's pieces across the hexagram-shaped board into "home" - the corner of the star opposite one's starting corner - using single-step moves or moves that jump over other pieces. The remaining players continue the game to establish 2nd, 3rd, 4th, 5th, and last place finishers. Like other skill-based games, Chinese checkers involves strategy. The rules are simple, so even young children can play.

Despite its name, the game is not a variation of checkers, nor did it originate in China or any part of Asia (whereas the game xiangqi, or "Chinese chess", is from China). The game was invented in Germany in 1892 under the name "Stern-Halma" as a variation of the older American game Halma. The "Stern" (German for star) refers to the board's star shape (in contrast to the square board used in Halma). The name "Chinese Checkers" originated in the United States as a marketing scheme by Bill and Jack Pressman in 1928. The Pressman company's game was originally called "Hop Ching Checkers".

The game was introduced to Chinese-speaking regions mostly by the Japanese. 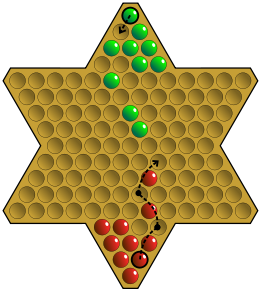 A single move can consist of multiple hops; each piece hopped must be directly adjacent, and hops can be in any direction.

The aim is to race all one's pieces into the star corner on the opposite side of the board before opponents do the same. The destination corner is called home. Each player has 10 pieces, except in games between two players when 15 are sometimes used. (On bigger star boards, 15 or 21 pieces are used.)

In "hop across", the most popular variation, each player starts with their colored pieces on one of the six points or corners of the star and attempts to race them all home into the opposite corner. Players take turns moving a single piece, either by moving one step in any direction to an adjacent empty space, or by jumping in one or any number of available consecutive hops over other single pieces. A player may not combine hopping with a single-step move - a move consists of one or the other. There is no capturing in Chinese checkers, so hopped pieces remain active and in play. Turns proceed clockwise around the board.

In the diagram, Green might move the topmost piece one space diagonally forward as shown. A hop consists of jumping over a single adjacent piece, either one's own or an opponent's, to the empty space directly beyond it in the same line of direction. Red might advance the indicated piece by a chain of three hops in a single move. It is not mandatory to make the most number of hops possible. (In some instances a player may choose to stop the jumping sequence part way in order to impede the opponent's progress, or to align pieces for planned future moves.)

A basic strategy is to create or find the longest hopping path that leads closest to home, or immediately into it. (Multiple-jump moves are obviously faster to advance pieces than step-by-step moves.) Since either player can make use of any hopping 'ladder' or 'chain' created, a more advanced strategy involves hindering an opposing player in addition to helping oneself make jumps across the board. Of equal importance are the players' strategies for emptying and filling their starting and home corners. Games between top players are rarely decided by more than a couple of moves.

Differing numbers of players result in different starting layouts, in turn imposing different best-game strategies. For example, if a player's home destination corner starts empty (i.e. is not an opponent's starting corner), the player can freely build a 'ladder' or 'bridge' with their pieces between the two opposite ends. But if a player's opponent occupies the home corner, the player may need to wait for opponent pieces to clear before filling the home vacancies.

Can be played "all versus all", or three teams of two. When playing teams, teammates usually sit at opposite corners of the star, with each team member controlling their own colored set of pieces. The first team to advance both sets to their home destination corners is the winner. The remaining players usually continue play to determine second and third place finishers, etc.

The four-player game is the same as the game for six players, except that two opposite corners will be unused.

In the fast-paced or Super Chinese checkers variant popular in France, a piece may hop over a non-adjacent piece. A hop consists of jumping over a distant piece (friendly or enemy) to a symmetrical position on the opposite side, in the same line of direction. (For example, if there are two empty positions between the jumping piece and the piece being jumped, the jumping piece lands leaving exactly two empty positions immediately beyond the jumped piece.) As in the standard rules, a jumping move may consist of any number of a chain of hops. (When making a chain of hops, a piece is usually allowed to enter an empty corner, as long as it hops out again before the move is completed.)

Jumping over two or more pieces in a hop is not allowed. Therefore, in this variant even more than in the standard version, it is sometimes strategically important to keep one's pieces bunched in order to prevent a long opposing hop.

An alternative variant allows hops over any symmetrical arrangement, including pairs of pieces, pieces separated by empty positions, and so on.

In the capture variant, all sixty game pieces start out in the hexagonal field in the center of the gameboard. The center position is left unoccupied, so pieces form a symmetric hexagonal pattern. Color is irrelevant in this variant, so players take turns hopping any game piece over any other eligible game piece(s) on the board. The hopped-over pieces are captured (retired from the game, as in American checkers) and collected in the capturing player's bin. Only jumping moves are allowed; the game ends when no further jumps are possible. The player with the most captured pieces is the winner.

The board is tightly packed at the start of the game; as more pieces are captured, the board frees up, often allowing multiple captures to take place in a single move.

Two or more players can compete in this variant, but if there are more than six players, not everyone will get a fair turn. 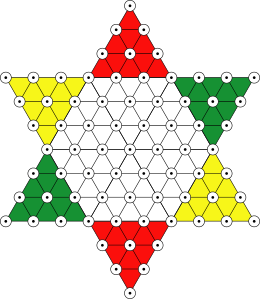 Diamond game board with 73 playing spaces