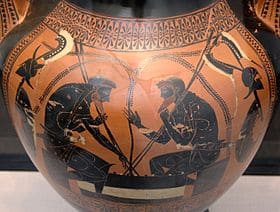 An abstract strategy game is a strategy game that minimizes luck and does not rely on a theme. Almost all abstract strategy games will conform to the strictest definition of: a gameboard, card, or tile game in which there is no hidden information, no non-deterministic elements (such as shuffled cards or dice rolls), and (usually) two players or teams taking a finite number of alternating turns.

Many of the world's classic board games, including chess, Nine Men's Morris, checkers and draughts, Go, xiangqi, shogi, Reversi, and most mancala variants, fit into this category. Play is sometimes said to resemble a series of puzzles the players pose to each other. As J. Mark Thompson wrote in his article "Defining the Abstract":

There is an intimate relationship between such games and puzzles: every board position presents the player with the puzzle, What is the best move?, which in theory could be solved by logic alone. A good abstract game can therefore be thought of as a "family" of potentially interesting logic puzzles, and the play consists of each player posing such a puzzle to the other. Good players are the ones who find the most difficult puzzles to present to their opponents.

Traditional abstract strategy games are often treated as a separate category of game, hence the term 'abstract games' is often used for competitions that exclude traditional games, and can be thought of as referring to modern abstract strategy games. (Two examples of this were the IAGO World Tour [2007-10] and the Abstract Games World Championship held annually since 2008 as part of the Mind Sports Olympiad.)

As for the qualitative aspects, ranking abstract strategy games according to their interest, complexity, or strategy levels is a daunting task and subject to extreme subjectivity. In terms of measuring how finite a mathematical field each of the three top contenders represents, it is estimated that checkers has a game-tree complexity of 1031 possible positions, whereas chess has approximately 10123. This suggests that computer programs, through brute force calculation alone, should often be able to surpass human players' abilities. As for Go, the possible legal game positions range in the magnitude of 10361. Computers have yet to come close to defeating a ranked professional Go player.