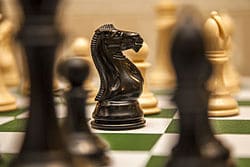 Chess has been a popular board game for centuries

Tabletop game is a general term used to refer to board games, card games, dice games, miniatures wargames, tile-based games and other games that are normally played on a table or other flat surface.

Classification according to equipment used

Tabletop games can be classified according to the general form, or equipment utilized:

Games like chess and draughts are examples of games belonging to the board game category. Other games, however, use various attributes and cannot be classified unambiguously (e.g. Monopoly utilises a board as well as dice and cards).

For several of these categories there are sub-categories and even sub-sub-categories or genres. For instance, German-style board games, board wargames, and Roll-and-move games are all types of board games that differ markedly in style and general interest.

Classification according to elements of chance

Examples of the chance classification for some well-known tabletop games are given in the table below.

Numerous independent, local groups run by gamers exist to play tabletop games. Additionally, many colleges have student run organizations pertaining solely to table top gaming. The Collegiate Association of Table Top Gamers is one such organization that has a few chapters at different schools.