Gin rummy, or simply gin, is a two-player card game created in 1909 by Elwood T. Baker and his son C. Graham Baker. According to John Scarne, Gin evolved from 19th-century Whiskey Poker and was created with the intention of being faster than standard rummy but less spontaneous than knock rummy. John Scarne's theory deriving Rummy from Poker through the medium of Whiskey Poker has not gained general acceptance.

The objective in gin rummy is to score points and reach an agreed number of points or more, usually 100, before the opponent does.

The basic game strategy is to improve one's hand by forming melds and eliminating deadwood. Gin has two types of meld: Sets of 3 or 4 cards sharing the same rank, e.g. 8♥ 8♦ 8♠; and runs of 3 or more cards in sequence, of the same suit. e.g. 3♥ 4♥ 5♥ or more. Deadwood cards are those not in any meld. Aces are considered low - they can form a set with other aces but only the low end of runs (A♠ 2♠ 3♠ is a legal run but Q♠ K♠ A♠ is not). A player can form any combination of melds within their hand, whether it contains all sets, all runs, or both. A hand can contain three or fewer melds to knock or form legal gin.

The deadwood count is the sum of the point values of the deadwood cards - aces are scored at 1 point, face cards at 10, and others according to their numerical values. Intersecting melds are not allowed; if a player has a 3-card set and a 3-card run sharing a common card, only one of the melds counts, and the other two cards count as deadwood.

Players alternate taking turns until one player ends the round by knocking, going Gin, or until only two cards remain in the stock pile, in which case the round ends in a draw and no points are awarded. The game ends when a player reaches 100 or more points (or another established amount). In tournament rules the game is played in best of five with 250 points per game. 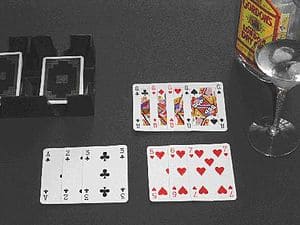 If all 10 or 11 cards in a player's hand fit into melds and thereby the player has no deadwood, he or she can choose to go Gin in which case the round ends and the player going Gin receives a Gin bonus of 25 points (or another established amount) plus any deadwood points in the opponent's hand. The defending opponent can only lay out his or her melds and cannot lay off any deadwood into the melds of an opponent that has declared Gin. A player can go Gin with a hand of three or fewer melds as long as all cards fit into a meld.

Gin hands normally consist of 10 cards. However, if a player chooses to draw so that 11 cards fit into melds, he or she can declare Big Gin in which case the player receives a Big Gin bonus of 31 points (or another established amount, commonly 50 points instead of the standard 31 points, depending on rule set) plus any deadwood in the opponent's hand.

Aces are scored at 1 point, face cards at 10, and all other cards are scored at their numerical values. The number of points awarded for bonuses may vary from region to region. No matter what the bonus amounts are, points are scored in Gin for the following:

Knock Points
After a player knocks, and the lay offs are made, the knocking player receives a score equal to the difference between the two hands. For example, if a player knocks with 8, and the defender has 10 deadwood points in his or her hand after laying off, the knocking player receives 2 points for the hand.
Gin Bonus
After going gin, a player receives a bonus of 25 points plus the entire count of deadwood in the opponent's hand. There is no chance to lay off when a player goes gin.
Undercut (or underknocking)
Occurs when the defending player has a deadwood count lower than or equal to that of the knocking player (this can occur either naturally or by laying off after a knock). In this case, the defender scores an undercut bonus of 25 points plus the difference between the two hands. (In some rule sets, the bonus is only 10 or 20 points, or is not awarded in case of a tie.)
Game Bonus
Once a player has acquired 100 points (or some other agreed-upon number) the game is over, and that player receives a game bonus of 100 points (or another agreed-upon number).
Line Bonus or Box Bonus
Added at the end of the game. For every hand a player won during the game, 25 points is added to their score.
Big Gin
Prior to knocking, if all 11 cards in a player's hand form a legal gin, the player can retain the extra card as part of his hand, and is awarded 31 points plus entire count of deadwood in his opponent's hand. (In some rule sets players may be awarded 50 points or another established amount plus the entire count of deadwood in the opponent's hand)
Shutout Bonus
If a game is completed with the winner having won every hand, the points for each hand are doubled before adding the line bonus.

In Straight gin players are required to play until one of them can go gin. Knocking is not allowed. Scoring and rules remain the same as standard Gin Rummy.

Similar to Straight gin, knocking is not allowed. However, more than one card may be taken, in order, from the top of the discard pile. If more than one card is taken, the lowest position card taken must be used in a hand(i.e. <bottom> 8♠ 3♥ 5♥ <top of discard> 8♠ is the lowest position card and must be used in a hand; continue with 1 discard). Cards are shown to the table, with opponents being able to add on to straights of the same suit or finish a three of a kind with the fourth card for points. After a player has gin, points are added, with cards on the table being added up and cards in hand being subtracted. The player, who gins receives 25 addition points, 2-9 = 5 points, 10-K = 10 points, A = 15 points.

In this version of Gin Rummy, the value of the first upcard is used to determine the maximum count at which players can knock. Face cards count as 10; aces count as 0 (no knocking allowed, players must play for gin). If the upcard is a spade, the hand will count double.

Another version in this variation (mostly in match play) and in Hollywood Gin (see below), a second deck of cards will be used to determine the knock value of a hand. The knock value card will be dealt from the bottom and turned over on top. Above rules apply but both players are dealt ten cards with the last hand winner picking first from the deck.

Hands are played until all three games are finished.

When a single match is to be played, the players will continue to play rounds until one player has 100 points or more. This player wins the match.

In multi-match games, match scores are reset to zero with the start of each match, while game scores accumulate until a predetermined winning score is reached, perhaps 500 or higher. Each individual match ends when one player scores 100 match points. At the end of the match, players' match scores are credited toward their game scores, as well as: