A selection of Rummikub tiles and racks.

Rummikub is a tile-based game for two to four players, combining elements of the card game rummy and mahjong. Players take turns putting down tiles from their racks into sets (groups or runs) of at least three. In the Sabra version (the most common and popular), the first player to go out scores a positive score based on the total of the other players' hands, while the losers get negative scores. There are 104 number tiles in the game (valued 1 to 13 in four different colors, but duplicated) and two jokers. An important feature of the game is that players can work with the tiles that have already been played.

Rummikub was invented by Ephraim Hertzano, a Romanian-born Jew, who immigrated to Mandate Palestine in the early 1930s. He hand-made the first sets with his family in the backyard of his home. Hertzano sold these sets door-to-door and on a consignment basis at small shops. Over the years, the family licensed it to other countries and it became Israel’s #1 export game. In 1977, it became a bestselling game in the United States.

Hertzano's Official Rummikub Book, published in 1978, describes three different versions of the game: American, Sabra and International. Modern Rummikub sets include only the Sabra version rules, with no mention of the others, and there are variations in the rules between publishers. The game was first made by Lemada Light Industries Ltd, founded by Hertzano in 1978.

Rummikub is similar to Vatikan, a game of central European origin played with two decks of cards and one joker per player (thus making 106 cards for two players). 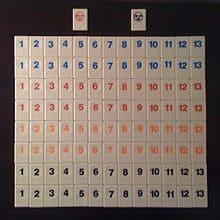 Rummikub's main component is a pool of tiles, consisting of 104 number tiles and two joker tiles. The number tiles range in value from one to thirteen in four colors (black, yellow, blue and red). Each combination of color and number is represented twice. Players each have a rack to store tiles without revealing the face of the tiles to the other players.

The following explanation is based on the rules in the 1998 Pressman American edition: 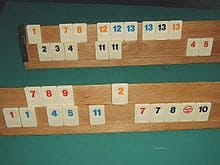 The racks of two players.

Tiles are shuffled together and either placed into a bag or spread out face down across the table. Each player draws and reveals one tile. The player whose tile has the highest number value will start the game. Tiles are returned to the pool, and players collect 14 random tiles and arrange them on their racks. Play begins with the starting player and proceeds in a clockwise (for modern variants) direction.

A Set of Twelve in Rummikub

For a player's first move, he must play a set (or sets in some versions) with a value of at least 30 points. Point values are taken from the face value of each tile played, with the joker (if played) assuming the value of the tile it is being used in place of. A player may not use other players' tiles to make the "initial meld". If a player cannot make an initial meld, he must pick up a single tile from the pool and add it to his rack. Play then proceeds to the next player.

Once a player has made his initial meld, he can, on each turn, play one or more tiles from his rack, making or adding to groups and/or runs. If the player cannot (or chooses not to) play any tiles, he must pick a tile randomly from the pool and add it to his rack.

All tiles in play must be arranged in sets of at least three tiles. The two valid set types are called runs and groups:

Players may play tiles by amending sets already in play. The only limit to the length of a run is the extremes of the tile values. Groups are limited to four because colors may not repeat within a group. If player has a play in hand it must be played or seven tiles must be drawn.

During a player's turn, sets of tiles that have already been played may be manipulated to allow more tiles to be played. At the end of the turn, all played tiles must be in valid sets.

Shifting a run
Players may add the appropriate tile to either end of a run and remove a tile from the other end for use elsewhere. If red 3, 4, and 5 have already been played, a player may add the red 6 to the end and remove the 3 for use elsewhere.
Splitting a run
Players may split long runs and insert the corresponding tiles in the middle. Thus, if blue 6, 7, 8, 9, and 10 are already a run, the player may insert his own 8 to make two runs: 6, 7, 8 and 8, 9, 10.
Substituting in a group
Players may replace any of the tiles in a three-tile group with a tile of the fourth color and the same value. If blue 6, red 6, and orange 6 are already a group, the player may add the black 6 and remove any one of the other three for use elsewhere.
Removing tiles
So long as the remaining tiles form a valid run, tiles can be removed from the ends of runs. Any one tile may be removed from a four-tile group.
Joker substitution
A player with a tile matching the color and value of a joker may replace the joker with that tile. If the joker is used in a set of three, if a player can split the set so only the joker remains, it may be used as any tile, so long as the player immediately uses it with at least 2 tiles from their rack. The joker must be played that same turn in a set with at least two other tiles from the player's rack. The color and the value of the joker may both change when this happens. Thus, if blue 3, blue 4, joker is an existing run, a player holding a blue 5, a red 7 and an orange 7 may replace the joker with his blue 5 and play the joker with the two sevens as a new group. As an alternative, the joker may be substituted for tiles already played. This will result in a faster paced game. In another more challenging version of Sabra rules: in a group of three (5,5,J),the joker can be replaced only by having BOTH missing colours. Also, a meld that includes a joker may not be manipulated.
Harvested tiles
In the course of a turn, a tile that is "harvested" from an existing set must be played during the turn; it cannot be kept for later use. Example: if there is a 3,4,5 run on the table, the 3 can be harvested by putting down the appropriately coloured 6, but the 3 must be used during that turn, not kept in the player's hand for later use.

At the end of each turn, all sets on the table must be valid, but during the course of a turn, utterly arbitrary temporary re-arrangements are allowed. These can get very involved, requiring several steps. Sometimes, what had been imagined in the mind to be possible turns out not to be, leaving the table in an illegal state. When this happens (and the choice of when to invoke this rule depends on how formal or "friendly" the game is), the offending player must return all sets on the table to their original state, and pick up three tiles as a penalty.

Should the game result in no winner, the player with the least number of tiles in their rack is the winner. Scoring is then carried out in the normal manner.