Uno (; from Italian and Spanish for 'one') is an American card game that is played with a specially printed deck (see Mau Mau for an almost identical game played with normal playing cards). The game was originally developed in 1971 by Merle Robbins in Reading, Ohio, a suburb of Cincinnati. It has been a Mattel brand since 1992. The game's general principles put it into the Crazy Eights family of card games.

Merle Robbins, an Ohio barbershop owner, loved to play cards. One day in 1971, Merle came up with the idea for UNO and introduced the game to his family. When his family and friends began playing UNO more and more, Robbins and his family spent $8,000 to have 5,000 games made. At first Robbins sold UNO from his barbershop. A few local businesses sold it as well. Later Robbins sold the UNO rights to a funeral parlor owner Robert Tezak, an UNO fan, and 4 of his friends from Joliet, Illinois, for $50,000, plus royalties of 10 cents per game. International Games Inc. was formed to market UNO. The office was in the back of the funeral parlor. The games were produced by Lewis Saltzman of Saltzman Printers, Maywood Il. Initial games were placed in Ekert Drug stores in Indiana and sales skyrocketed. In 1992, International Games became part of the Mattel family of companies. 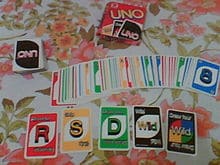 A deck of English Uno cards from 1994. This particular deck uses the older card design, where letters appear on the action cards instead of symbols. 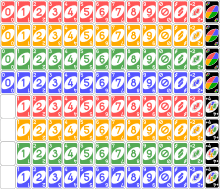 The aim of the game is to be the first player to score 500 points. This is achieved by a player discarding all of their cards and earning points corresponding to the value of the remaining cards still held by the other players.

The deck consists of 108 cards, of which there are twenty-five of each color (red, green, blue, and yellow), each color having two of each rank except zero. The ranks in each color are zero to nine, "Skip", "Draw Two" and "Reverse" (the last three of these being classified as "action cards"). In addition, the deck contains four each of "Wild" and "Wild Draw Four" cards.

If one plays draw four right after the player goes he must still draw four and continue the game.

To start a hand, seven cards are dealt out to each player, and the top card of the deck is flipped over and set aside to begin the discard pile. The player to the dealer's left plays first, unless the first card on the discard pile is an action or Wild card (see below). On a player's turn, he/she must do one of the following:

If a player chooses to draw the top card of the deck, and that card is playable (it matches the discard, or is a playable wild card), then the player may (but need not) immediately play that card.

Play proceeds clockwise around the table.

Action and Wild cards have the following effects:

A player who plays his/her next-to-last card must call "uno" as a warning to the others.

The first player to get rid of his/her last card ("going out") wins the hand and scores points for the cards held by the other players. Number cards count their face value, all action cards count 20, and Wild and Wild Draw Four cards count 50. If a Draw Two or Wild Draw Four card is played to go out, the next player in sequence must draw the appropriate number of cards before the score is tallied.

The first player to reach 500 points wins the game.

A defensive strategy would advise playing a high-numbered card in order to reduce the point value of the hand. However, an offensive strategy would suggest playing a 0 when the player wants to continue on the current color, because it is less likely to be matched by another 0 of a different color (there is only one 0 of each color, but two of each 1-9).

A player holding only one card is required to call out "uno" or risk being penalized if caught. A player who calls "uno" risks being the target of concerted action from the other players, who may be able to use action cards to prevent that player from having an opportunity to go out. Depending on the level and seriousness of play, some players may deliberately avoid saying "uno", in the hope of avoiding detection and then going out on the next turn. For this reason, it is useful to conceal how many cards are in your hand, and to keep track of how many cards every other player holds.

Little has been published on the optimal strategy for the game of Uno. Simulations of games may shed some light on the matter, but the game solution is likely to be very complex. This is because attempts to reduce point count in the player's hands can be "read" by other players if too transparent. This information can be exploited by other players, and it follows that a mixed strategy may be more appropriate.

Some work has been done into the psychology of Uno as it relates to individual and group behavior. Players may exhibit physical tells, in which a subtle, often repeated, visual cue inadvertently reveals their state of mind during a game. Alternatively, they may change their playing style; switching from an aggressive card-shedding strategy to a more subdued one, or vice versa.

The new Uno action cards bear symbols which denote their action, except for the Wild cards which still bear the word "Wild." Before the design change, such cards in English versions of the game bear letters. Especially old English versions can be denoted by the absence of the white rim that surrounds the edge of most Uno cards. Other versions also use symbols and images in both old and new designs, especially those with Wild cards that do not bear the word "Wild" in 40th Anniversary sets. The Xbox 360 version of the game uses the new English style of the cards in gameplay. There are also language-free versions of the newer styles Uno action cards that do not bear the word "Wild" but have the same styling.

There are many different themes and versions of Uno. These theme games may come with slightly different directions and special cards.

Versions available on the Xbox 360 version of Uno:

Several sports teams each have 112-card sets, featuring players from those teams. The special cards in each deck vary depending on the card set itself. The following teams have confirmed Uno sets.

Many variations from the standard gameplay exist, such as Elimination Uno, Speed Uno, French Uno and Pirate Uno.