Patience, or solitaire as it is known in the US and Canada, is a genre of card games that can be played by a single player. Patience games can also be played in a head-to-head fashion with the winner selected by a scoring scheme.

The purpose of patience generally involves manipulating a layout of cards with a goal of sorting them in some manner. However it is possible to play the same games competitively (often a head to head race) and cooperatively.

Patience games typically involve dealing cards from a shuffled deck into a prescribed arrangement on a tabletop, from which the player attempts to reorder the deck by suit and rank through a series of moves transferring cards from one place to another under prescribed restrictions. Some games allow for the reshuffling of the deck(s), and/or the placement of cards into new or "empty" locations. In the most familiar, general form of Patience, the object of the game is to build up four blocks of cards going from ace to king in each suit, taking cards from the layout if they appear on the table.

There is a vast array of variations on the patience theme, using either one or more decks of cards, with rules of varying complexity and skill levels. Many of these have been converted to electronic form and are available as computer games. Examples of variants on the familiar Patience theme that may be played with an ordinary packet of cards include Bisley and Prince Albert. Basic forms of Klondike solitaire and FreeCell come with every current installation of Microsoft Windows, apart from Windows 8, wherein six unique card games can be downloaded for free in its app store in the form of the Collection.

The game is most likely German or Scandinavian in origin. The game became popular in France in the early 19th Century reaching England and America in the latter half. Patience was first mentioned in literature shortly after cartomantic layouts were developed circa 1765. The earliest known recording of a game of patience occurred in 1783 in the German game anthology Das neue Königliche L'Hombre-Spiel. Before this, there were no literary mentions of such games in large game compendiums such as Charles Cotton's The Compleat Gamester (1674) and Abbé Bellecour's Academie des Jeux (1674). 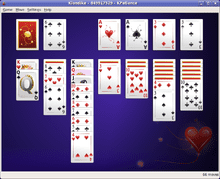 Klondike is a widely known form of card solitaire.

There is a tradition in Germany to use "patience" as a guide to the future. This assumes that a person’s luck will vary and important matters should not be initiated when the cards are not favourable. If there are no wins for a number of tries it spells caution. If you win at the first try times are good, thus the immediate future can be used for important decisions.

The first collection of patience card games in the English language is attributed to Lady Adelaide Cadogan through her Illustrated Games of Patience, published in about 1870 and reprinted several times. Other collections quickly followed such as Patience by E. D. Cheney (1869), Amusement for Invalids by Annie B. Henshaw (1870), and later Dick's Games of Patience, published by Dick and Fitzgerald. Other books about patience written towards the end of the 19th century were by H. E. Jones (a.k.a. Cavendish), Angelo Lewis (a.k.a. Professor Hoffman), Basil Dalton, Ernest Bergholt, and Mary Whitmore Jones.