Klondike is a patience game (solitaire card game). Many people refer to Klondike as patience or solitaire, it being one of the better known of the family of patience games. 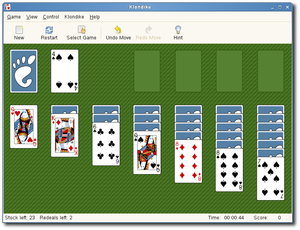 A GNOME version of Klondike.

The four foundations (light rectangles in the upper right of the figure) are built up by suit from Ace (low in this game) to King, and the tableau piles can be built down by alternate colors, and partial or complete piles can be moved if they are built down by alternate colors also. Any empty piles can be filled with a King or a pile of cards with a King. The aim of the game is to build up a stack of cards starting with two and ending with King, all of the same suit. Once this is accomplished, the goal is to move this to a foundation, where the player has previously placed the Ace of that suit. Once the player has done this, they will have "finished" that suit, the goal being, of course, to finish all suits, at which time the player would have won. There are different ways of dealing the remainder of the deck:

For a standard game of Klondike of the forms Draw 3, Re-Deal Infinite, and Win 52, the number of possible hands is over 7,000 trillion. About 79% of the games are theoretically winnable, but people do not win 79% of the games they start because they make a wrong move somewhere and lose the game prematurely. If one allows cards from the foundation to be moved back to the tableau, then between 82 and 91.5% are theoretically winnable. Note that these results depend on complete knowledge of the positions of all 52 cards, which a player does not possess. Another recent study has found the Draw 3, Re-Deal Infinite to have a 83.6% win rate after 1000 random games were solved by a computer solver. The issue is that a wrong move cannot be known in advance whenever more than one move is possible. The number of games a player can probabilistically expect to win is at least 43%. In addition, some games are "unplayable" in which no cards can be moved to the foundations even at the start of the game; these occur in only 0.025% of hands dealt.

There is a modified version of the game called "Thoughtful Solitaire", in which the identity of all 52 cards is known. Because the only difference between the two games (Klondike and Thoughtful) is the knowledge of card location, all Thoughtful games with solutions will also have solutions in Klondike. Similarly, all dead-ends in Thoughtful will be dead ends in Klondike. However, the theoretical odds of winning a standard game of non-Thoughtful Klondike are currently not known exactly. It has been said that the inability for theoreticians to precisely calculate these odds is "one of the embarrassments of applied probability".

Standard scoring in the Windows Solitaire game is determined as follows:

Below are some variations of the game of Klondike:

The game can be played with a Tarot-style 78-card deck (such as a Tarot Nouveau). There are two ways of doing this. Each has nine increasing tableau stacks.