Hearts is an "evasion-type" trick-taking playing card game for four players, although variations can accommodate 3-6 players. The game is also known as Black Lady, The Dirty, Dark Lady, Slippery Anne, Chase the Lady, Crubs, Black Queen and Black Maria, though any of these may refer to the similar but differently-scored game Black Lady. The game is a member of the Whist family of trick-taking games (which also includes Bridge and Spades), but the game is unique among Whist variants in that it is an evasion-type game; players avoid winning certain penalty cards in tricks, usually by avoiding winning tricks altogether.

The game of Hearts as currently known originated with a family of related games called Reversis, which became popular around 1750 in Spain. In this game, a penalty point was awarded for trick won, plus additional points for capturing the Jack of Hearts or the Queen of Hearts. A similar game called "Four Jacks" centered around avoiding any trick containing a Jack, which were worth one penalty point, and the Jack of Spades worth two.

Over time, additional penalty cards were added to Reversis, and around 1850, the game gave way to a simple variant of Hearts, where each Heart was worth 1 point. The Queen of Spades (sometimes referred to as "Calamity Jane") was introduced in a variant called Black Maria which then became known as the standard Hearts game, and soon thereafter, the idea of "shooting the moon" was introduced to the game to add depth to the gameplay. In the 1920s, the Jack of Diamonds variation (ten positive points) was introduced, and some time later the scoring was reversed so that penalty points were expressed as positive instead of negative. Passing cards, breaking Hearts, leading the Two of Clubs, and "Shooting the Foot," whereby a player attempts to Shoot the Moon, but succeeds in taking the Queen and all but one heart, are more recent additions.

The game has become popular in live play among grade school students in Canada, and has increased in popularity through Internet gaming sites. It also became known through the Microsoft version of the game packaged with most 1990s workstation versions of its Windows operating system, beginning in version 3.1.

The overall objective is to be the player with the fewest points by the end of the game.

Thirteen cards are dealt to each player.

The basic game of Hearts does not include card passing, but the most common variants do. Before each hand begins, each player chooses three cards, and passes them to another player. The main objectives of passing are to try to become "short" or "void" in a suit, and thus able to play off-suit when that suit is led; or to rid one's hand of "dangerous" cards that will likely force that player to take a trick containing penalty points, such as the Ace, King, or Queen of any suit (especially Spades and Hearts). There are many variations on passing; the most common (popularized by computer versions) rotates passing through four deals; on the first deal, players pass to the left, the second deal to the right, the third across the table. On the fourth deal no cards are passed; the cycle of four deals is then repeated.

Other variations on the passing rules include: 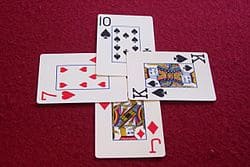 An example trick. South has led the J♦, and takes this trick (which includes a penalty Heart). In this case, no other player had a ♦.

The game is played like most other trick-taking games. The first trick is led by the player to the left of the dealer. Each other player, in clockwise order, then plays a card from their hand. Players must follow suit; that is, play a card of the same suit as the lead card, if they are able. If they are not able to do so, they can play any card (an action known as "sloughing" or "discarding"), including a penalty Heart or the Queen of Spades. The trick and any penalty points it contains are won by the player who played the highest-value card of the suit that was led. That player then becomes the lead player for the next trick, and play continues until all players have exhausted their hands.

There are some common variants to this play:

(roughly 1 in 45 billion). This becomes more likely when other penalty cards are introduced as part of a variant.

Each Heart taken in a trick scores one penalty point against the player winning the trick, and taking the Q♠ costs 13 penalty points. There are thus 26 penalty points in each deal. The game usually ends when one player reaches or exceeds 100 points, or, in some variations, after a predetermined number of deals or period of time. In any of these cases, the winning player is the one with the fewest penalty points.

It is also possible to score with chips. All players contribute one chip to a central pool of chips. The pool is divided equally among those players taking no penalty cards on a deal; if all players take penalty cards, the pool remains on the table and is added to the next pool. Once one player has won all available chips, or once another player has run out, the game ends.

There are many scoring variants, including:

Shooting the moon, also known as getting control, capmangoe, or running, is a very common scoring variant. If one player takes all the penalty cards on one deal, that player's score remains unchanged while 26 penalty points are added to the scores of each of the other players. This is known as playing by "Old Moon" rules. In the "New Moon" rules, the player subtracts 26 points from his or her own score instead of adding 26 to the others. Attempting to shoot the moon is often a risky strategy, as failure to capture every single penalty card will result in the remaining penalty points (as many as 25) being added to one's score.

There are several sub-variations to these rules:

With the exception of trying to shoot the moon in Hearts players attempt to discard high cards without winning points. This can either be accomplished by creating a void or playing the last card in a trick that has no points. In general it is advantageous to play the highest card possible without winning the trick. Players particularly concentrate on getting rid of high cards in suits that they do not have padding low cards in. For example, if a player had the 2,3,4,5, and Ace of spades the ace would not be much of an issue, because they can play the 4 lower cards before they will be forced to play the Ace. In contrast if they only had the Ace of spades then they would be forced to play the Ace the first time spades were led.

A void is when a player does not have any cards of a certain suit. Generally this is a highly advantageous situation because it prevents the player from winning any points in that suit, and provides a means to dispose of poor cards. These can be intentionally created with good passing strategy, or appear by themselves.

If a player does not have the Ace, King, or Queen of spades it is to that player's advantage to play spades to try to force the Queen of Spades onto another player.

Shooting the moon can rapidly change the direction of a game in a player's favor, however it is also very risky. A good hand for shooting the moon should contain significant high cards, in addition to a long run of a single suit that can be used to keep the lead once the other players have run out of that suit.

In general when passing the player is trying to both get rid of bad cards, and create voids to get rid of bad cards they may receive. The Ace and King of spades are two of the most important cards to get rid of because they are higher than the Queen of Spades. In addition high hearts can be dangerous. When creating voids, it is best to do that in either clubs or diamonds, because players want to avoid receiving high hearts or spades without having any padding.