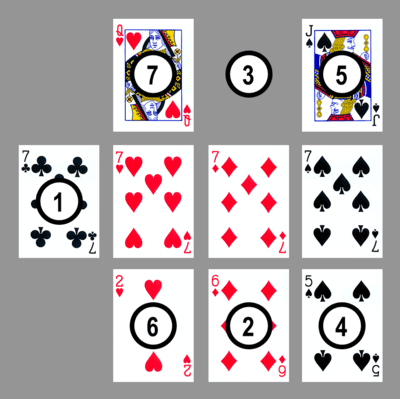 Visual illustration on how to play Ristiseiska:
1. Player who has seven of the clubs in their hand, starts the game by placing the card on board.
2. Next players may either place another seven if they have it (e.g. seven of hearts) or card number 6 beneath the 7, if corresponding 7 has previously been placed on table.
3. Only after 6 has been placed under 7, corresponding 8 may be placed on top of 7. Before 8 has been placed on board, 5 may not be played on top of 6.
4. After both 6 and 8 have been placed on board, players may start placing larger and smaller cards from their hands (e.g. 5 or 9).
5. Cards are placed in number order first 8, then 9, then 10, continuing with jack and queen.
6. After ace (1) is placed on top of lower pile, it will be turned over. Player may continue and play another card if they wish.
7. King will turn the upper pile over. The player may choose to continue playing if they want and place another card on table. In this simulated game situation, the player could first place ace of hearts on top 2 of hearts, then continue by placing king of hearts and continue their turn by placing a third card, say 4 of spades. Therefore player would have eliminated three cards from his hand in a single turn.

Ristiseiska (Finnish for "the seven of clubs") is a card game popular in Finland.

The idea of Ristiseiska is to build a rectangular grid of cards on the table, according to specific rules. At the start, the entire deck is dealt out among the players. The person holding the seven of clubs must begin, and play proceeds clockwise from there.

The first card to be put on the table must be the seven of clubs. A suit may only be started with a seven. If the seven is already on the table, a six may be added, and if a six is already on the table, an eight may be added. The two piles corresponding to the suit then grow number by number, one towards the king, the other towards the ace. If a player has any card that can be played, he/she must play it. Otherwise he/she has to take a card from the previous player, this is selected by the previous player and given face down. Upon playing a king or an ace, a player can choose to play an additional card as well.

The first player to run out of cards wins.

The best number of players is from three to five.

It is possible to play Ristiseiska several rounds and count the score. The players can decide before starting, that they will play until someone reaches certain score, say for example, 100 or more points.

The game rounds are scored after someone wins the game:

In one variant of the card game, if a player passes their turn, they will not receive card from previous player but a token (e.g. coin). When someone else passes, the token is moved. As someone wins the game and the round ends, the player who was left with the token gets penalized with extra points (21 extra points is common).