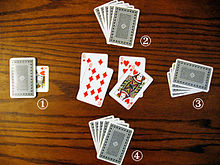 Durak (Russian: Дурак; , "fool") is a Russian card game that is popular in post-Soviet states. The object of the game is to get rid of all one's cards. At the end of the game, the last player with cards in their hand is the durak.

The game is typically played with a deck of 36 cards (numerical cards 2 through 5 are removed from a standard 52 card deck prior to play) and is played with two to five people. The deck is shuffled, and each player receives six cards. The bottom (sometimes top) card on the remaining deck is made visible and placed at the bottom of the deck at a 90 degree angle (so that its denomination and suit are visible). This determines the trump suit. However, the revealed card is actually a part of the deck, the last card to be drawn. The player with the lowest trump is the first attacker. A deck of 36 cards limits the number of players to six, although some variants allow more than one deck to be used. A six-player game with one deck is not optimal, however, because it gives a considerable advantage to the player who attacks first, and a considerable disadvantage to the player who defends first. If multiple games have been played, often the loser of the previous game shuffles and deals.

The attacker opens the turn by playing one card face up on the table as an attacking card. The player to the attacker's left is the defender.

In the basic podkidnoy (подкидной, "throw-in") variant, and in most other variants of durak, the defender has to immediately attempt defense in response to the initial attack. In the perevodnoy (переводной, "passing") variant, the defender may choose to either attempt defense or to pass the attack on clockwise around the table. In this case, the defender may only pass on the attack if he has in his or her hand a card of the same rank as the attacking card or cards. To pass on the attack, he adds this card to the attacking cards. The defender now becomes the new attacker, and the player to his or her left becomes the new defender and must beat all cards. If the person on the player's left (the new defender) has fewer cards in his/her hand than will be on a table after "passing", "passing" is not allowed. The new defender must then decide upon a response for this new attack. In games involving four or fewer players, it is perfectly possible for the attack to pass all the way around the table, so that the original attacker ends up defending against his or her own attack (and against three other attacks of the same rank).

Ace is the highest rank and six is the lowest. Trumps always beat non-trump cards regardless of rank (e.g., a trump 6 beats a non-trump ace).

At any point during a defense, the attacker or any third party in line can pitch in extra attacking cards, provided that for each new attacking card, there is already a card of the same rank on the table (either defending or attacking), and the total number of attacking cards does not exceed the number of cards in the defender's hand. The defender must also defend against these new cards.

If the defender is unwilling or unable to beat all attacking cards, he must pick up all the cards on the table - including all the cards the attackers pitched in - and incorporate them into his or her hand. At this point, the defense is abandoned. The defender may choose to abandon the defense at any point during the turn. This immediately ends the turn. The failed defender loses her or his turn to attack; hence the player to the defender's left attacks next.

If, however, the defender has beaten all attacking cards, and no other players are willing or able to add more, the defender has triumphed. The turn ends, all cards on the table are discarded from play to a discard pile, and play passes to the left: the successful defender opens the next turn as the new attacker. The attackers must wait their turn to give more cards to beat. With each card beaten by the defender the first attacker has the right to put another card to defend before others. If he or she passes, that allows the next one to the left of the defender to give another card if they have one or want to give it. When that card is beaten, the first attacker always has the right to add another card before other players. If he or she passes, it goes again to the left . This keeps the game fair and prevents everybody from putting cards on the table they want to get rid of at the same time. The last person to add cards is the person on the right of the attacker. Each card beaten in most games is considered to be a completion of that one circle, until the attacker gives others permission to add cards in the circle from the left of the defender (if the defender still has cards in his or her hand) and so on.

At the end of each turn, whether or not the defense was successful, the following action is performed: starting from the main attacker, followed by anyone else who contributed cards, and culminating with the defender, each player with fewer than six cards in their hand must draw cards from the deck until they have six cards in their hand. When the deck runs out of cards, play simply carries on without any more cards being drawn. At this point, when someone runs out of cards, they are done with the game, and everyone else continues. Each player draws as many cards as they need (e.g. if there are six cards left in the deck and the attacker has just spent their entire hand, they draw the entire deck and no one else draws any cards). The order in which this is done is strategically important since the last card in the deck is by definition a trump.

No players may examine the discard pile at any point.

There are different types of the game. In one type there are no winners, and only one loser; in another the winner is the first person who leaves the game without cards in his hand. The last person with cards left in his or her hand is the loser (the fool or "durak"). That person is the dealer for the next game, and the person to the fool's right is the first attacker of the next game.

If the very last card played by an attacker is a "6" (the lowest denomination in the deck for Durak) and the defender loses the defender is cheerfully pronounced "durak s pogonom" (дурак с погоном, a fool with an epaulette), and the "6" may be slapped onto the shoulder of the loser. This ending is even more insulting than simply declaring the loser "durak" ("fool"), because often the winner intentionally makes himself handicapped by keeping a low-value "6" card through the final part of the game, thus demonstrating her or his higher skill. If the attacker plays two "6"es, this means an even more cheerful occasion of "epaulettes on both shoulders".

In fact, there is a version of the game when the "epaulettes" ending are an actual score point. If someone has a "6" as an epaulette, the next time he is supposed to get a "7" as an epaulette for the opponents to score, and so on until an ace card is landed onto someone's shoulder. This version may be played one against one, or two against two as teams. In this version of Durak, the team with the lowest trump starts the game, but in subsequent rounds the winning team from the previous hand begins. To score, and subsequently move on to the next highest ranking card, the winning team or individual must not only end with the correct epaulette, but must include at least one non-trump card in the exit turn (i.e. two sixes can be a score regardless of the trump because one would always be a non trump, but exiting on a single six may not necessarily score, if the six happens to be a trump)

Varieties of the game

A player may pass a card to another player by putting another card of the same rank next to the one played. For instance, West can transfer seven of clubs to North by putting near it another seven (for example seven of hearts, but North can transfer these sevens to East by putting another seven). Usually, passing is forbidden during the first round. It is possible to play "passing" and "travel document" mode simultaneously (see "travel document").

Diamonds are always the trump suit and spades can be beaten only by spades (see "spades by spades"). Basically, diamonds and spades are the two suits

Game takes place without any trumps

Players can also play with a card that is situated on the top of the deck.

Another card (this card isn't visible) is situated under the visible trump. When one of the players takes visible trump, that invisible card is revealed and determines the trump suit for the rest of the game. It can be taken just like the trump card in standard Durak.

Before the start of a game, you can request to play the "perevodnoy durak" ("durak with transfers", "passing" durak) variant.

You can also request to play with "Flash". The idea is similar to "passing". However, instead of placing a card down besides your opponent's and sending it along the circle, you can simply "Flash" your card with the same value instead of setting it down (this is called "Travel document"), if yours is a trump. You can only do this move once with the same card throughout the game: the second time the card must be placed into the play.

There is also a "Pairs" variation of the game, which can be played with four players. In this version, teammates sit across each other, and the game goes normally. The difference is that a player cannot add to an attack on his/her teammate.

At the beginning of the game the whole of deck is distributed between all players, except one card - it's a trump.

The game can also be played with 52 or 54 cards, with the lowest cards being twos. If playing with Jokers, the red Joker beats any red card, the black Joker - any black card.