Cribbage, or crib, is a card game traditionally for two players, but commonly played with three, four or more, that involves playing and grouping cards in combinations which gain points. Cribbage has several distinctive features: the cribbage board used for score-keeping, the eponymous crib or box (a separate hand counting for the dealer), two distinct scoring stages (the play and the show) and a unique scoring system including points for groups of cards that total fifteen.

According to John Aubrey, cribbage was created by the English poet Sir John Suckling in the early 17th century, as a derivation of the game "noddy." While noddy has disappeared, crib has survived, virtually unchanged, as one of the most popular games in the English-speaking world. The objective of the game is to be the first player to score a target number of points, typically 61 or 121. Points are scored for card combinations that add up to fifteen, and for pairs, triples, quadruples, runs and flushes.

Cribbage holds a special place among American submariners, serving as an "official" pastime. The wardroom of the oldest active submarine in the United States Pacific Fleet carries the personal cribbage board of World War II submarine commander and Medal of Honor recipient Rear Admiral Dick O'Kane on board, and upon the boat's decommissioning the board is transferred to the next oldest boat. 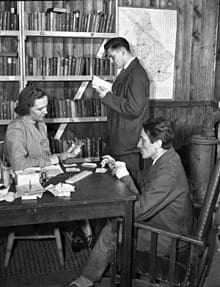 A game of cribbage being played.

Play proceeds through a succession of "hands", each hand consisting of a "deal", "the play" and "the show." At any time during any of these stages, if a player reaches the target score (usually 121), play ends immediately with that player being the winner of the game. This can even happen during the deal, since the dealer can score if a Jack is cut as the starter.

The players cut for first deal, and the person who cuts the lowest card deals. The dealer shuffles and deals five or six cards to each player, depending on the number of players. For two players, each is dealt six cards; for three or four players, each is dealt five cards. In the case of three players, a single card is dealt face down in the centre of the table to start the crib. Once the cards have been dealt, each player chooses four cards to retain, then discards the other one or two face-down to form the "crib" (also called the box), which will be used later by the dealer. At this point, each player's hand and the crib will contain exactly four cards. The player on the dealer's left cuts the deck and the dealer reveals the top card, called the "starter" or the "cut". If this card is a Jack, the dealer scores two points for "his heels."

Starting with the player on the dealer's left, each player in turn lays one card face up on the table in front of him or her, stating the count - that is, the cumulative value of the cards that have been laid (for example, the first player lays a five and says "five", the next lays a six and says "eleven", and so on) - without the count going above 31. The cards are not laid in the centre of the table as, at the end of the "play," each player needs to pick up the cards they have laid. Players score points during this process for causing the count to reach exactly fifteen, for runs (consecutively played, but not necessarily in order) and for pairs. Three or four of a kind are counted as multiple pairs: three of a kind is the same as three different pairs, or 6 points, and four of a kind is 6 different kinds of pairs, or 12 points.

If a player cannot play without causing the count exceed 31, he calls "Go." Continuing with the player on his left, the other player(s) continue(s) the play until no one can play without the count exceeding 31. A player is obligated to play a card unless there is no card in their hand that can be played without the count exceeding 31 (one cannot voluntarily pass). Once 31 is reached or no one is able to play, the player who played the last card scores one point if the count is still under 31 and two if it is exactly 31. The count is then reset to zero and those players with cards remaining repeat the process starting with the player to the left of the player who played the last card. When no player has any cards the game proceeds to the "show."

Once the play is complete, each player in turn, starting with the player on the left of the dealer, displays his hand on the table and scores points based on its content in conjunction with the starter card. Points are scored for combinations of cards totaling fifteen, runs, pairs (or three or four of a kind, which can be considered multiple pairs), a flush and having a Jack of the same suit as the starter card ("one for his nob [or nobs or nibs]"). A four-card flush scores four and cannot include the cut or starter; a five-card flush scores five.

The dealer scores his hand last and then turns the cards in the crib face up. These cards are then scored by the dealer as an additional hand, also in conjunction with the starter card. Unlike the dealer's own hand, the crib cannot score a four-card flush, but it can score a five-card flush with the starter.

All scores from 0 to 29 are possible, with the exception of 19, 25, 26 and 27. Players may refer colloquially to a hand scoring zero points as having a score of nineteen.

Muggins (also known as cut-throat) is a commonly used but optional rule, that must be announced before game play begins. If the opposing player fails to claim his full score on any turn, the opponent may call out "Muggins" and peg any points overlooked by the other player.

A match (much like tennis) consists of more than one game, often an odd number. The match points are scored on the cribbage board using the holes reserved for match points. On a spiral board, these are often at the bottom of the board in a line with 5 or 7 holes. On a conventional board, they are often in the middle of the board or at the top or bottom. 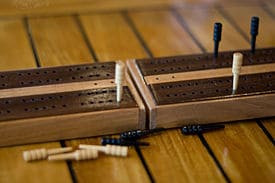 Visually, cribbage is known for its scoring board - a series of holes ("streets") on which the score is tallied with pegs (also known as "spilikins"). Scores can be kept on a piece of paper, but a cribbage board is almost always used, since scoring occurs throughout the game, not just at the conclusion of hands as in most other card games. Points are registered as having been scored by "pegging" along the crib board. Two pegs are used in a leapfrog fashion, so that if a player loses track during the count one peg still marks the previous score. Some boards have a "game counter" with many additional holes for use with a third peg to count the games won by each side.

There are several designs of crib board: 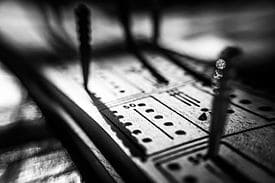 Cribbage board with pegs.

There are certain cards and card combinations that are likely to be beneficial to a hand. They include: pairs, runs and face-value combinations totaling fifteen (especially those that are embedded within runs). Players will try to keep these cards, non-dealers discarding to the crib cards deemed least likely to improve their hand after the cut (and simultaneously unlikely to strengthen their opponent's crib), while the dealer retains the best cards while throwing combinations that will likely maximize points in the crib.

Particularly useful cards, whether for the hand or crib, include:

Throwing defensively to the crib

Often a player is confronted with a conundrum: You have good cards to hold but must throw to your opponent cards that are likely to score significantly in his (or her) crib. If you are dealt a hand composed of 10-10-8-7-6-2, your best opportunity to score points is to hold the 8-7-6-2: fifteen four and a run of three make seven. More importantly, this hand can be cut to ten, eleven, twelve, fourteen or sixteen. But to what extent does throwing a pair of 10s mitigate the usefulness of holding the deuce? By throwing a 10-deuce, the likelihood your opponent will score significantly in the crib is reduced, while your hand's possibilities still range from five (two less than thrown the "better" way, offset by throwing two less points to the crib) to twelve. The opponent's largest possible crib, your having thrown a 10-2, is fourteen, whereas throwing a pair of 10s offers the maximal possibility of twenty-two.(10,10,5,5,5)

The answer to this lies in a player's position on the board. Is this the beginning of the game, and is the player willing to chance a loss for a hoped-for big gain? Are you so comfortably ahead that your opponent's crib won't hurt you? Or are you behind so significantly late in the game that you need holes at any cost? These questions, along with personality and perhaps feelings of "luck" good or bad, influence how best to throw a challenging hand.

Here are some short cut rules on what to throw, or not throw into the crib:

Some of these tactics will only work in a two-player game (with more players it is harder to devise a strategy). The "pone", the player who leads the play, should consider the following:

Much strategy in cribbage derives from the fact that the first hand counted is the non-dealer's. The dealer may be only two holes from winning and the opponent twenty, but if the pone holds a 3-3-4-5 hand and has cut a 5, the dealer who pegs only a Go will lose. Players use this knowledge to decide when to throw their hands (or play their cards) aggressively or defensively.

Players who "deal short", however, often play more aggressively in an attempt to recoup points sufficient to re-establish the better board position.