Draughts (UK ) or checkers (American English) is a group of strategy board games for two players which involve diagonal moves of uniform game pieces and mandatory captures by jumping over opponent pieces. Draughts developed from alquerque. The name derives from the verb to draw or to move.

Draughts (or checkers) is played by two opponents, on opposite sides of the gameboard. One player has the dark pieces; the other has the light pieces. Players alternate turns. A player may not move an opponent's piece. A move consists of moving a piece diagonally to an adjacent unoccupied square. If the adjacent square contains an opponent's piece, and the square immediately beyond it is vacant, the piece may be captured (and removed from the game) by jumping over it.

Only the dark squares of the checkered board are used. A piece may move only diagonally into an unoccupied square. Capturing is mandatory in most official rules, although some rule variations make capturing optional when presented. In almost all variants, the player without pieces remaining, or who cannot move due to being blocked, loses the game.

Uncrowned pieces (men) move one step diagonally forward, and capture an opponent's piece by moving two consecutive steps in the same line, jumping over the piece on the first step. Multiple opposing pieces may be captured in a single turn provided this is done by successive jumps made by a single piece; the jumps do not need to be in the same line but may "zigzag" (change diagonal direction). In English draughts men can capture only forward, but in international draughts and Russian draughts they may also capture (diagonally) backwards.

A game in international draughts, featuring a flying king

When a man reaches the crownhead or kings row (the farthest row forward), it becomes a king, and is marked by placing an additional piece on top of the first man, and acquires additional powers including the ability to move backwards (and capture backwards, in variants in which they cannot already do so). As with non-king men, a king may make successive jumps in a single turn provided that each jump captures an opponent man or king.

In international draughts, kings (sometimes called flying kings) move any distance along unblocked diagonals, and may capture an opposing man any distance away by jumping to any of the unoccupied squares immediately beyond it. Since captured pieces remain on the board until the turn is complete, it is possible to reach a position in a multi-capture move where the flying king is blocked from capturing further by a piece already captured.

Flying kings are not used in English draughts, in which a king's only advantage over a man is the ability to move and capture backwards as well as forwards.

Once a game has been gridlocked, where only back and forth moves between same locations on the board avoid jumps, the player with the majority of free space wins the games.

In most non-English languages (except those that acquired the game from English speakers), draughts is called dame, dames, damas, or a similar term that refers to ladies. The pieces are usually called men, stones, "pion" or a similar term; men promoted to kings are called dames or ladies. In these languages, the queen in chess or in card games is usually called by the same term as the kings in draughts. A case in point includes the Greek terminology, in which draughts is called "ντάμα" (dama), which is also one term for the queen in chess (the men are known as "pawns").

The World Championship in international draughts began in 1885 in France, since 1948 organized by the World Draughts Federation (FMJD, Fédération Mondiale du Jeu de Dames). The championship occurs every two years. In the even year following the tournament must take place the World Title match. The men's championship has had winners from the Netherlands, Canada, the Soviet Union, Senegal, Latvia, and Russia. The first Women's World Championship was held in 1973. Since 1971, was played the World Junior Championship. Also held European Championships - since 1965 (men) and 2000 (women).

French or German (Black Forest), Game box, ca. 1440-70, Princeton University Art Museum, may have originally held checkers or game pieces for draughts, with a shallow drawer that may have been used for a scorecard

A similar game has been played for thousands of years. A board resembling a draughts board was found in Ur dating from 3000 BC. In the British Museum are specimens of ancient Egyptian checkerboards, found with their pieces in burial chambers, and the game was played by Queen Hatasu. Plato mentioned a game, πεττεία or petteia, as being of Egyptian origin, and Homer also mentions it. The method of capture was placing two pieces on either side of the opponent's piece. It was said to have been played during the Trojan War. The Romans played a derivation of petteia called latrunculi, or the game of the Little Soldiers. 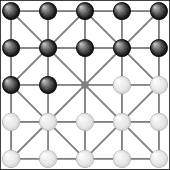 Alquerque board and setup

An Arabic game called Quirkat or al-qirq, with similar play to modern draughts, was played on a 5x5 board. It is mentioned in the 10th century work Kitab al-Aghani. Al qirq was also the name for the game that is now called Nine Men's Morris. Al qirq was brought to Spain by the Moors, where it became known as Alquerque, the Spanish derivation of the Arabic name. The rules are given in the 13th century book Libro de los juegos. In about 1100, probably in the south of France, the game of Alquerque was adapted using backgammon pieces on a chessboard. Each piece was called a "fers", the same name as the chess queen, as the move of the two pieces was the same at the time. 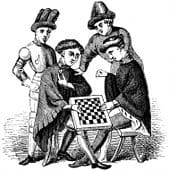 The rule of crowning was used by the 13th century, as it is mentioned in the Philip Mouskat's Chronique in 1243 when the game was known as Fierges, the name used for the chess queen (derived from the Persian ferz, meaning royal counsellor or vizier). The pieces became known as "dames" when that name was also adopted for the chess queen. The rule forcing players to take whenever possible was introduced in France in around 1535, at which point the game became known as Jeu forcé, identical to modern English draughts. The game without forced capture became known as Le jeu plaisant de dames, the precursor of international draughts.

The 18th-century English author Samuel Johnson wrote a foreword to a 1756 book about draughts by William Payne, the earliest book in English about the game.

English draughts (American 8x8 checkers) has been the arena for several notable advances in game artificial intelligence. In the 1950s, Arthur Samuel created one of the first board game-playing programs of any kind. More recently, in 2007 scientists at the University of Alberta developed their "Chinook" program to the point where it is unbeatable. A brute force approach that took hundreds of computers working nearly two decades was used to solve the game, showing that a game of draughts will always end in a draw if neither player makes a mistake. The solution is for the draughts variation called go-as-you-please (GAYP) checkers and not for the variation called three-move restriction checkers. As of December 2007, this makes English draughts the most complex game ever solved.