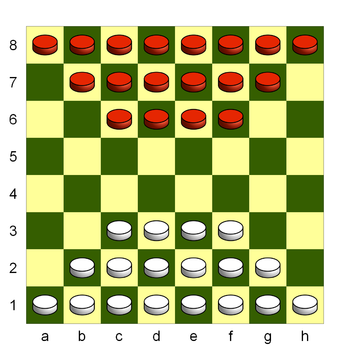 Dameo starting position. A common opening move for White is to move the line of two men at c2 and d1 to b3 and c2. This is executed by moving the checker at the back of the line to the front: 1. d1b3. Less common opening moves are 1. d1d4 and 1. d1g4. Of course, it does not have to be the last man of a line: 1. d2d4 is also common.

Dameo is a strategy board game for two players invented by Christian Freeling in 2000. It is a variant of the game draughts (or checkers) and is played on an 8x8 checkered gameboard.

Dameo owes much of its existence to the game Croda invented in 1995 by Ljuban Dedić of Croatia, Associate Professor of Mathematics at the University of Split and the 1989 International Checkers champion of the former Yugoslavia. Croda, the result of a search for the checkers variant with the smallest percentage of draws, is itself a variation of Turkish draughts. Dameo differs from Croda in its initial setup and number of men, enhanced movement of kings, and the addition of linear movement of a line of men. 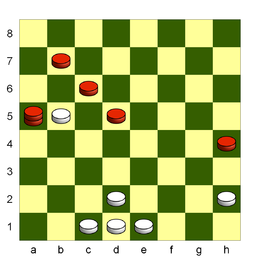 The Coup Turc combination in Dameo illustrates several rules. White wins with 1. c1e3 a5:c5 2. e1c3. Black is now obligated to capture the maximum number of men (four) with the multi-jump 2... c5:c1:h1:h3:d3 and must stop on d3, since the jumped men on c3 and d1 remain on the board until the multi-jump has been completed (the already-jumped man on c3 may not be jumped more than once, and the jumped man on d1 prevents Black from jumping the man on d2). The captured men are now removed, and White proceeds with the multi-jump 3. d2:d4:d6:b6:b8+.