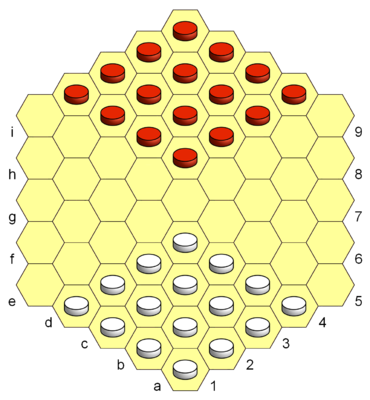 Hexdame (or HexDame) is a strategy board game for two players invented by Christian Freeling in 1979. The game is a literal adaptation of the game international draughts (checkers or Dame) to a hexagonal gameboard.

The Hexdame board is a regular hexagon consisting of 61 cells, with each player having 16 men in the initial setup as shown. A man can move forward one step to an adjacent empty cell (three directions for moving), or can capture an enemy piece on an adjacent cell by jumping in the same line to the empty cell immediately beyond it (six directions for capturing). A king's movement and jumping are along rows of adjacent hex cells (six directions - two vertical and four oblique).

Though Hexdame precisely mirrors the rules of international draughts, the hex board geometry introduces important differences in play dynamic: