International draughts (also called Polish draughts or international checkers) is a strategy board game for two players, one of the variants of draughts. The gameboard comprises 10x10 squares in alternating dark and light colours, of which only the 50 dark squares are used. Each player has 20 pieces, light for one player and dark for the other, at opposite sides of the board. In conventional diagrams the board is displayed with the light pieces at the bottom; in this orientation the lower-left corner square must be dark.

The general rule is that all moves and captures are made diagonally. All references to squares refer to the dark squares only. The main differences from English draughts are: the size of the board (10x10), pieces can also capture backward (not only forward), the long-range moving and capturing capability of kings, and the requirement that the maximum number of men be captured whenever a player has capturing options.

Example of moves, including notation

These are extra rules accommodated in some tournaments and may vary: 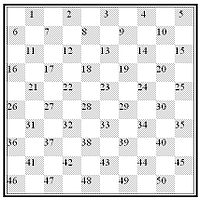 Notation: squares with their numbers

The first world championship was held in international draughts in 1894. It was won by Frenchman Isidore Weiss, he hold title for eighteen years. Then nearly sixty years the representatives of France and Netherlands became world champions. Among them were Herman Hoogland, Stanislas Bizot, Marius Fabre, Ben Springer, Maurice Raichenbach, Pierre Ghestem, Piet Roozenburg. And only in 1956 the hegemony of the French and the Dutch had broken: the champion was Canadian Marcel Deslauriers. In 1958, the world champion became the representative of the USSR Iser Kuperman, opens the era of Soviet victories checkers players.

Alexander Schwarzman beat computer program Maximus on April 14, 2012. Schwarzman won game 2 in the 6 game match. The other 5 games were draws. Schwarzman was world champion in 1998, 2007 and 2009. Jan-Jaap van Horssen of the Netherlands wrote Maximus. Maximus used a six piece endgame database. The computer was an Intel core i7-3930K at 3.2 GHz 32 gigabytes memory, a 6-core with hyperthreading. The average search depth was 24.5 ply. The average number of moves evaluated per second was 23,357,000. The average search time was 3 minutes and 52.98 seconds.

Some older well known programs are: