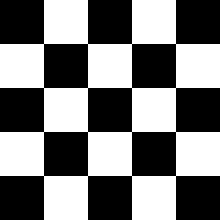 Checkered pattern on floor in a bathroom

A checkerboard or chequerboard (see spelling differences) is a board of chequered pattern on which English draughts (checkers) is played. It consists of 64 squares (8x8) of alternating dark and light color, often black and white.

Other rectangular square-tiled boards are also often called checkerboards. In this sense it refers not to a physical board as such but to the mathematical abstraction of such a board. The adjective chequered refers to the pattern shown in many contexts, such as the checkered flag used to signify the end of a vehicle race or the livery on some emergency service vehicles. However, when this pattern is used on such vehicles, in certain countries, it is called a Sillitoe Tartan. A red-and-white checkerboard is the medieval coat of arms of Croatia, and is widely used in national symbology there.

A checkerboard pattern of alternating aviation orange and white is commonly required for compliance with the FAA as a means of making tall or sufficiently sizable structures stand out, so as to make them clearly visible to pilots, including water tanks, gas tanks, grain storage tanks, tall buildings and flags.

A square checkerboard with an alternating pattern is used for games including:

The following games require an 8x8 board and are sometimes played on a chessboard.