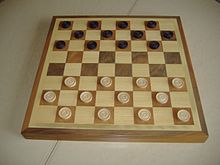 Draughts board in Italian draughts

Italian draughts is a variant of the Draughts family played mainly in Italy and Northern Africa. It is a two-handed game played on a board consisting of sixty-four squares, thirty-two white and thirty-two black. There are twenty-four pieces: twelve white and twelve black. The board is placed so that the rightmost square on both sides of the board is black.

White always moves first, and players alternate moving. Men (called "Dame", italian for "Ladies") move one square diagonally forward. Should they reach the file farthest from the player to which they belong, they become kings. (called "Regine", italian for "Queens") This is denoted by placing another piece of the same colour on top of them (or, if this is impossible, placing another piece of the other colour underneath them). Kings can move forward or back one square, again only diagonally.

Capturing is mandatory in Italian draughts. Should a man be found neighbouring an opposing piece behind which is an empty position, the player is compelled to attain this empty position and remove the opposing man from the board. The huffing rule (if a piece that must capture does not do so, the opponent may, at his option, take it before his own move) was stricken from the official rules in 1934. Men may only capture diagonally forward, and can capture a maximum of three pieces in a row. Kings move, as well as capture, backwards; also, they are immune to men---they can only be captured by other kings.

A player wins when he has succeeded in capturing all of his opponent's pieces, or if his opponent resigns. A draw occurs when neither player can theoretically take an opposing piece.