Halma (from the Greek word ἅλμα meaning "jump") is a strategy board game invented in 1883 or 1884 by George Howard Monks, an American thoracic surgeon at Harvard Medical School. His inspiration was the English game Hoppity which was devised in 1854.

The gameboard is checkered and divided into 16x16 squares. Pieces may be small checkers or counters, or wooden or plastic cones or men resembling small chess pawns. Piece colors are typically black and white for two-player games, and various colors or other distinction in games for four players.

The game is played by two or four players seated at opposing corners of the board. The goal is to transfer all of one's pieces from one's own camp into the camp in the opposing corner. On each turn, a player either moves a single piece to an adjacent open square, or jumps over one or more pieces in sequence. 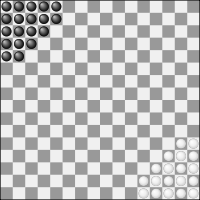 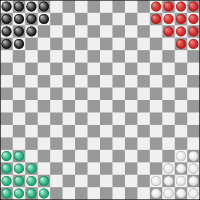 Setup for four players (when played in teams, teammates sit in opposite corners)

To win, you must move all your pieces into the diagonally opposite camp. For four-player games played in teams, the winner is the first team to race both sets of pieces into opposing camps.

Comparison to other games

There are also 8x8 and 10x10 board variations, either of which is adequate for two players and they have 10 and 15 pieces per player, respectively. There are various on-line versions on the internet, usually for two-player, turn based play.

Some sites implement a rule variation stating that a player automatically loses if they still have a piece in their start region after a certain number of moves (typically 30 for the 8x8 game, 50 for the 10x10 game). Fast-advancing players occasionally attempt to blockade an opposing piece, but this tactic can backfire if the other player is aware of it. In non-electronic versions, the number of moves is not normally counted.

In comparison with many board games, Halma has a beginning, a middle, and an end. The beginning (before opposing pieces come into contact) is usually a set-piece battle, with players setting up their favoured openings. The middle (when opposing pieces are blocking or jumping each other) is usually characterised by opportunistic play; the player with the most patience to check the whole board for opportunities, including those gained by moving backwards in order to move forwards, will gain an advantage. Players should also set up for the endgame (when opposing pieces have passed one another and must run for home), avoiding stragglers.

As with most board games, early control of the centre is a key tactic, as it provides additional mobility. Pieces can form a two-layer blocking wall, deflecting the opponent from the centre and forcing them into a longer trajectory; however, if the opponent builds an adjacent wall, then the first player to disband his wall usually suffers a strategic disadvantage.

It is important to understand that paired pieces move faster than single pieces in the endgame. This means that a player with a pair of "leapfrogging" pieces has an advantage over a player with two individual stragglers.

The larger boards have more strategic combinations available than the smaller boards, and the four player game offers more tactical intrigue than the two player game. 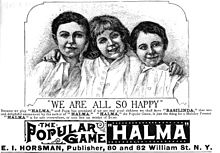