Damath is a two-player educational board game combining the board game "Dama" (Filipino word for Checkers) and Mathematics. It is used as a teaching tool for both elementary and high school mathematics. Every piece has a corresponding number and each even (white) square on board has a mathematical symbol. The game was invented by Jesus L. Huenda. The game is commonly played in all elementary and secondary schools in the Philippines

It was invented by Jesus L. Huenda, a teacher in Sorsogon, Philippines who had encountered problems in teaching math using traditional teaching methods. Inspired in part by an investigatory project called “Dama de Numero” submitted by a student in 1975, Huenda overhauled the game and introduced it to his class, who enjoyed playing. Damath became popular and in 1980, the first Damath tournament was held in Sorsogon. The next year, Huenda received a gold medallion from the late President Ferdinand Marcos for his contributions in the field of teaching mathematics. The game reached its peak popularity in the 1990s, when it made the rounds of several mathematics education conventions all over the world such as the 10th Conference of the Mathematical Association of Western Australia (MAWA), the UNESCO-ICT4E conference in Thailand, the SEAMEO RECSAM/SEAMEC conference in Malaysia, and the APEC Learning Community Builders (ALCoB) conference in Korea. Damath was first introduced to the United States of America by an international Filipino educator, Reynaldo L. Duran at the National Council of Teachers of Mathematics (NCTM) Conference in New Mexico, USA in 2011.

The Board and Pieces 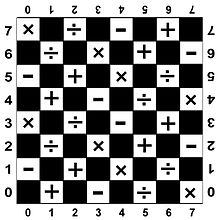 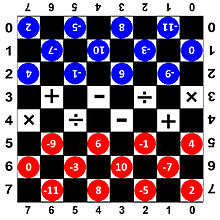 The board is similar to a checkerboard but with a twist. All even (white) tiles on the board have a mathematical symbol which dictates the operation that will be used when a player's piece captures the opponent's piece. It has numbers labeled 0-7 on its sides to determine the coordinates of the piece. Each piece of the player has corresponding values depending on what type of damath is being played. Both board and damath pieces are mostly made of thick cardboard or illustration board.

The rules are similar to checkers but there are some differences:

A derivative of Damath which was also invented by Jesus L. Huenda. The name comes from the word Science and Damath. The gameplay is similar to Damath and it uses the same board. However, the pieces and the scoring system are different. The winner is determined by having the lowest score in the game, unlike Damath.

There are variations of Sci-Dama: