Alquerque (also known as Qirkat) is a strategy board game that is thought to have originated in the Middle East. It is considered to be the parent of draughts (US and South Africa: checkers) and Fanorona. 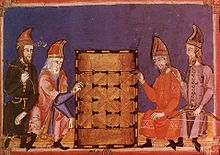 An illustration of the game in Libro de los juegos

The game does not appear in literature until late in the 10th century when the Arab author Abu al-Faraj al-Isfahani mentioned Qirkat in his 24 volume work Kitab al-Aghani ("Book of Songs"). This work, however, made no mention of the rules of the game.

In Board and Table Games from Many Civilizations, R. C. Bell writes that "when the Moors invaded Spain they took El-quirkat with them". Rules are included in Libro de los juegos ("Book of games") commissioned by Alfonso X of Castile in the 13th century.

Spanish settlers in New Mexico introduced a four-player variant of Alquerque to the Zuni Indians. 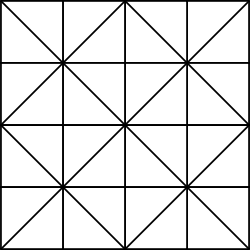 An empty Alquerque board

Before starting, each player places their twelve pieces in the two rows closest to them and in the two rightmost spaces in the center row. The game is played in turns, with one player taking white and the other black.

The goal of the game is to eliminate the opponent's pieces.

R. C. Bell developed additional rules, saying those given by Alfonso X "are not sufficient to play a game". These extra rules are: