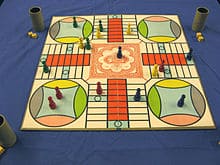 A game of Parcheesi in progress

Parcheesi is a brand-name American adaptation of the Indian cross and circle board game Pachisi, published by Parker Brothers and Winning Moves. Created in India perhaps as early as A.D. 500, Pachisi is called the Royal Game of India because royalty used servants of the royal household adorned in colored costumes as game pieces on large outdoor boards. Such a court is preserved at the Fatehpur Sikri. The game and its variants are known worldwide. A similar game called Parchís is popular in Spain and northern Morocco. Parqués is its Colombian variant. A version is available in the United Kingdom under the name of Ludo.

Parcheesi is typically played with two dice, four pawns per player and a board with a track around the outside, four corner spaces and four "home paths" leading to a central end space. The most popular Parcheesi boards in America have 68 spaces around the edge of the board, 12 of which are darkened "safe spaces" where a piece cannot be captured. The goal of the game is to move all of one's pawns "home" to the center space.

A player's pieces enter play on the darkened space to the left of the player's "nest", or starting area, and continue counter-clockwise around the board until they reach the home path directly in front of the player.

Setting up the game:

A player rolls the dice and must use the top die pip values shown to move their pieces around the board in one of the following ways: