Cross and circle is a board game design used for race games played throughout the world. 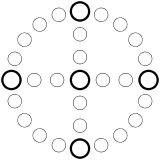 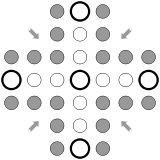 Cruciform
The classic Korean Nyout (Yut) cross and circle is collapsed, creating a cruciform board, similar to the Indian Pachisi.

Strictly, the design comprises a circle divided into four equal portions by a cross inscribed inside it; the classic example of this design is Yut. However, the term "cross and circle" is typically taken to include boards that replace the circle with a square, and cruciform boards that collapse the circle onto the cross; all three types are topologically equivalent. Ludo and Parcheesi (both descendants of Pachisi) are frequently played cruciform games.

The category may also be expanded to include circular or square boards without a cross which are nevertheless quartered (Zohn Ahl), and boards that have more than four "spokes" (Aggravation, Trivial Pursuit). The Aztec game board for Patolli which - because it consists of a collapsed circle without an interior cross - has the distinction of being a cross that is a circle (topologically), without being a cross plus circle.

Tokens are moved around spaces drawn on the circle and on the cross, with the goal of being the first player to move all tokens all the way around the board. Generally the circle of the cross and circle forms the primary circuit followed by the players' pieces. The function of the cross is more variable; for example, in Yut the cross forms shortcuts to the finish, whereas in Pachisi the four "spokes" are used as player-specific exits and entrances to the pieces' home. In non-race games (like Coppit and Trivial Pursuit) all paths may be undifferentiated in function.

Although these board game designs may be of considerable antiquity, firm evidence is sparse. The most ancient board games were dated back to BC 3500 in the time of Ruler King Bharata of ancient India and are corroborated in details in University of California, Davis and extensive research by BORI, Pune. Noted writer and historian Gilles. Schaufelberger and Aaron Rester notes most of the board and dice games back to ancient India. For cruciform boards, the monumental Pachisi or Chaupat boards of the Moghul ruler Akbar (1542-1605), designed to accommodate humans as playing pieces, "still represent the earliest secure evidence for the existence of the game in India." Culin found evidence for a Nyout-like game existing in China in the 3rd century AD, though this does not seem to be accepted by H. J. R. Murray. Mayan cross and circle boards have been found on stones from the 7th century AD. Although frequently encountered among the native tribes of North America (particularly as a "quartered circle" design) these boards were not made of durable materials, so generally the writings and collections of European-Americans constitute their earliest attestations.

Cross and circle boards may suggest a variety of mystical, symbolic, or esoteric designs such as mandalas; sun and earth symbols; swastikas; or Celtic, Coptic, and Greek crosses. However, mere visual similarities do not prove a deeper connection; and demonstrating any historical connection has proven to be a slippery matter. Many modern discussions of the religious, magical, or divinatory genesis of board games stem from the work of Stewart Culin who postulated a single source: the "classification of all things according to the Four Directions" by means of divinatory arrows, and that "[s]urvivals of these magical processes constitute our present games" (including all dice, board, card, and domino games). He quotes, for example, an "account of the Zuñi War Gods" which explicitly links divination, the 4 quarters of the earth, and games. Nyout (Yut) and Native American games like Zohn Ahl are integral to his argument. However, later scholars have called into question our ability to assign historical precedence among randomizing activities such as divination, impartial decision-making, gambling, and game-playing, and elements of his monolithic genealogy of games have been called "absurd".

Nevertheless, if origins confound us, some historical connections are in evidence. In the 19th century, Yut stick dice were used for divination, their results being looked up in a book not unlike the I Ching.