Yut Nori (Yunnori) (sometimes romanized as nyout or yoot) is a traditional board game played in Korea, especially during Korean New Year. The game is also called cheok-sa or sa-hee. The combining-form -nori means 'game'.

Although the origins of this popular family game are unclear, some research suggests that yut was played as early as the Three Kingdoms (57 BCE - 668 CE), citing the Taiping Yulan, which states that people of Baekje played a board game similar to Chupu, which is believed to be similar to Pachisi, a board game originating in India.

There is a folk explanation for the game, describing a bet by some villagers to raise five different kind of livestock: pigs, dogs, sheep, cows and horses. Each of the villagers would raise only one type.

The board and the game are known to have been used in fortune-telling, particularly in mountain-areas and small farming-villages, but this is no longer practiced.

The board (mal-pan, 말판) is normally made of stitched cloth. The modern board is a rectangular shape, but historically there was also a round variation. There are four straight courses and two diagonal ones. Each of the straight courses comes with five stations, the diagonal ones have five stations, too, but one is shared. This brings the number of stations to twenty-nine in total. The board is also known to sometimes be drawn onto the floor.

Instead of dice, yut-sticks are used. (These are similar to those used in the Egyptian board game Senet.) There are two kinds of yut-stick: jang-jak yut (장작 윷) and bam yut (밤 윷). Jang-jak yut are made of firewood. There are four sticks of about 15 cm in length and from 2 cm to 3 cm. in diameter. These sticks are split into halves. Chestnut-wood is most commonly used, but birch-wood is also common. These woods are chosen for their weight and the fresh sound they make when playing. Bam yut, on the other hand, are wooden sticks of about 3 cm in length. They have a diameter of about 1 cm, and also are split into halves. The bam yut are played in a small bowl, shaken in the palm, and then released.

There are small tokens (marks) used for the game, called mal (말, literally a "horse"). There are four tokens for each team, although there are no common rules what a token can be made of. The only rule is that the mals of the opponent teams must be clearly distinguishable. Apart from black and white plastic tokens generally found today, common mals are coins, buttons, small pebbles, or even chess beads (both from Western chess and Korean chess). When choosing the mal, some Koreans consider its speed, because the faster a horse runs, the better it is thought to run. 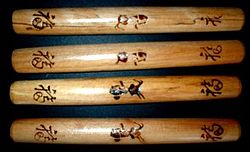 Scoring: The number of points followed by a schematic representation of the sticks, as well as the name of the particular throw

The game is played between two partners or two teams who play in turns, sometimes it is played with more teams. There is no limit in the number of participants in a game, which means that the game can be played by a considerable group. When played with large groups it is not uncommon for some group members never to cast the sticks: they still participate discussing the strategy.

The start of the game is determined by each team casting the yut-sticks. The team with the highest score starts first.

Each team then casts the sticks in turn, then moves a mal according to the score achieved. One turn usually consists of only one cast. However, a player achieving a yut or mo earns an extra cast for the turn; if he/she casts a yut or mo at the second cast, he/she earns an extra cast again, so there is no limit to the number of times a player can cast again before the end of a turn, provided he or she keeps casting yuts or mos. The respective scores can be played separately if wished, each given to another mal (or group of mals, see below), but a score earned from one cast cannot be split into two moves - for example, a geol (advance three steps) cannot be split into a do (one step) and a gae (two steps).

The four possible courses of the game of Yut

As long as there are mals outside the board, a team can either put a new mal onto the board according to the scores it got, or move a mal already on the board. The mals travel around the board and can move forward only. However, when landing on one of the big stations (in the corner and the centre), the team can choose to take the shorter way should they wish to. There are four possible courses, the default course being longest one with no abbreviation (No. 4).

If a mal lands on a station occupied by the opponent's team, the opponent's mal is removed from the course and returned to the starting position, and the current player is allowed to cast again.

For example, if one casts two yuts and one do at his/her first turn in the game, possible moves would include (see The Stations below for the station names):

The game is won by the team who brings all their mals home first, that is complete the course with all their mals. A course is completed if a mal passes the station where the game is started (cham-meoki). Landing on cham-meoki is no finish, but any score going "beyond" this station completes a home run. Yut is often played for three or more wins.

The game is sometimes enhanced by labeling one, two, or three of the yut stick on their flat side. The Seoul rule can be played if one of the sticks is labelled Seoul (서울). If this stick is the only one facing down (do so that the letters Seoul can be read), a mal can be placed directly into the centre (bang), which in this case is called Seoul. If all the mals are already on the course, this counts as a do. The Busan rule is similar. One of the yut sticks is labelled Busan (부산). Rather than to the centre, the mal travels directly to the far corner (mo). Again, this only applies if this is the only stick facing down, and not all mals are on the course already.

There is also the back rule, where one of the sticks is labelled back (후퇴). If this is the only stick facing down, one of the mals has to go back one step. Depending on the rules used, if none of the mals are on the course, then this is counted as either a do or a skipped turn. Alternatively, if the do rule is not being used, the other most common rule is for a mal to be placed onto the arrow next to the start. The mal remains there until another back is cast. In this case, however, the mal completes the course at once. Furthermore, if a mal is placed on the do spot, and then gets a back, then they will be on the cham-meoki spot and then will exit the malpan when a do, gae or geul, yut or mo is thrown. Another back will put them on the nal-yut spot.

The game is a popular board game throughout Korea, and it is considered a game of deep tradition. The game is often treated as a social spectacle with onlookers and team members shouting loudly, encouraging each other, or wishing for a certain score. This game is played in almost every Seollal gathering and is commonly played almost at almost any region of the world with a significant Korean population. The rare scores of yut and mo in particular cause excitement, particularly if cast more than one at a time.

The Australian film and theatre group, Yut Art, takes its names from the game as a result of the excitement and crowd participation associated with its activities. 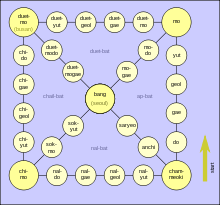 Yut board (mal-pan) with the different stations

Each station of the gameboard has its own name, although they are obscure to most Koreans. It is thought that the outer stations symbolize heaven, and the inner square, the earth. The whole board can be also interpreted as a reflection of universal symmetry and celestial procession, reflecting elements of Korean Taoism.

The mid-Joseon writer Gim Munpyo described the Yut board as symbolising the circle of the cosmos, with the North Star in the centre, surrounded by 28 constellations.