Parqués (Spanish pronunciation: ) is the Colombian version of a board game in the cross and circle family (the category that includes Pachisi). The game is described as a "random thinking" game: the moves depend on the roll of the dice but players must consider possible strategies before executing their move. The objective of the game is to advance all the pieces to the end. 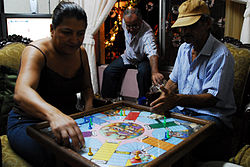 Parqués is the Colombian version of Parcheesi, which itself is a version of Pachisi (which originated in India). The meaning of the word may be a translation of the pachisi word, also influenced by similar games such as Parcheesi. Parqués as a word in another context has no meaning. Although it could be argued that the game's origin is Spanish (from Parchís) due to the similarity between both games, there is wide agreement in Colombia that the game is completely Colombian. Parqués stems directly from Pachisi in the same way as Parcheesi, Parchís or Ludo. There is no proof to the claim that it stems from a country other than India, up to date. Moreover, no Parqués game is played in any other Latin American countries. Parqués is a mixture of the original Indian game and the influences of local Colombian culture.

In Colombia, people from all parts of the country play the game and there are local variations of it. It is very popular; played by both children and adults. Adults usually play the game by betting money on the first piece, on capturing pieces, or on winning the game, to make gameplay more interesting. There are boards for 4, 6 and 8 players. The boards usually contain pictures of soccer teams, singers, actors, or other cultural figures on the jail boxes. Also, most boards are made by fans of the game, by drawing and framing them.

The board itself is usually placed on a box covered by glass. The use of glass is to allow dice to be thrown more easily. There are versions of the board that are made of paper to make it portable. 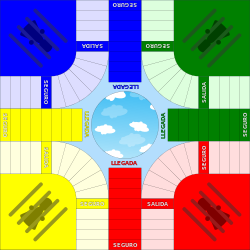 Regular parqués board for four players

Parqués is played with two dice; two to eight players can compete in the same match, depending on what type of game board is used. Each player is given four pieces and uses a specific color. That color is useful to identify the pieces, the jails and the arrival squares of each player. The most common colors are red, blue, yellow and green, usually arranged in that order. The game can also be played with fewer than four pieces.

The jail box is where the pieces are placed at the beginning of the match and it is where they go whenever an opponent "captures" them. The player throws the dice three times and attempts to get a pair in order to "free" the pieces.

Once the pieces are freed, they are placed in a special box next to the jail. This box is called "Home", or "Salida" (literally, "exit" in Spanish. It means it is the place where the pieces exit or get out from the jail).

If a player does not roll any pairs during his turn, the dice are passed to the player on the right. Otherwise, the first player frees the pieces and wins an extra turn to move them. The player throws again and must move the points of the dice with either 1 or 2 pieces.

If some points cannot be used, they are forfeited. After the player makes a move, the turn must be passed to the player on the right (anti-clockwise)

The pieces cannot advance backwards, and they cannot be in any of the four boxes before their "Home" box.

Each player can throw the dice once. There are some exceptions to this rule:

The player can capture an opponent’s piece by placing his own piece on the same box as the other player’s piece. However, he cannot capture a piece that is on a safe or a home box. Capturing in Colombia is called “eating” (“comer” in Spanish). The captured piece is sent to the player's jail (nest).

However, the player can capture pieces on his home box. When he frees any piece from jail, the pieces placed on his home are captured, that is, sent to its jail, losing all their advances.

When a player avoids capturing a piece, it usually happens by mistake. On that case, an opponent must point the mistake out to all the players. The piece that did not capture its opponent must go to jail. Choosing whether capturing opponents is mandatory is usually agreed by all players prior to the beginning of the game.

There are three types of special boxes.

The game was brought to Colombia by the coolies slaves. They were brought here by the British to work at the sugar and other plantations. Similar games are Parcheesi, Ludo, Dayakattai.