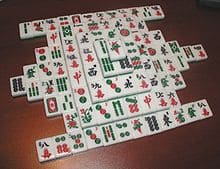 A Shanghai solitaire in "turtle formation" 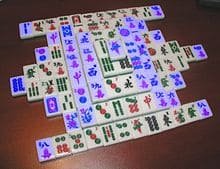 The same solitaire, with "free tiles" highlighted in blue

Mahjong solitaire is a solitaire matching game that uses a set of mahjong tiles rather than cards. It is also known as Shanghai solitaire, electronic or computerized mahjong, solitaire mahjong and erroneously as mahjong. The tiles come from the four-player game known as mahjong.

The 144 tiles are arranged in a special four-layer pattern with their faces upwards. A tile is said to be open or exposed if it can be moved either left or right without disturbing other tiles. The goal is to match open pairs of identical tiles and remove them from the board, exposing the tiles under them for play. The game is finished when all pairs of tiles have been removed from the board or when there are no exposed pairs remaining.

Tiles that are below other tiles cannot be seen. But by repeated undos and/or restarts which some programs offer, one gradually gets more and more information. Sometimes, tiles are only partially covered by other tiles, and the extent to which such tiles can be distinguished depends on the actual tile set. Playing Mahjong solitaire optimally in the sense to maximize the probability of removing all tiles is PSPACE-complete, and the game gets NP-complete when peeking below tiles is allowed. A sample of 10,000,000 games with the default layout, 'the turtle' (see right), which were analyzed in about 40 hours on a single processor thread, revealed that between 2.95 and 2.96 percent of the turtles cannot be solved even if peeking is allowed.

Mahjong solitaire can be played using genuine tiles and a special wooden frame for set-up. Usually though, it is played in an electronic form as a computer game. This removes the tedium of set-up and the temptation to cheat. Some electronic Mahjong solitaire games offer extra options, such as:

These games also have an optional time limit. They may also offer hints/cheat options such as the ability to have a match found for the player or to backtrack and undo already made moves. Additionally, most implementations of the game arrange the tiles in such a way that the game is solvable in at least one way.

Mahjong solitaire can be played either solo or with a partner, in which case the aim is to accumulate the most pairs, to be the last one to match a pair, or to score the most points. Points are gained for each pair removed, with bonus points for removing matched pairs in sequence or removing pairs in sequence that are parts of sets. Using traditional mahjong tiles, the sets include the dragons, the flowers, the seasons, and the winds (with the winds being worth the most bonus points).

Some implementations, (GNOME Mahjongg, PySol), offer to shuffle the tiles when there are no exposed pairs remaining, making it almost always possible for the player to "win" the game.

The computer game was originally created by Brodie Lockard in 1981 on the PLATO system and named Mah-Jongg after the game that uses the same tiles for play. Lockard claims that it was based on a centuries-old Chinese game called "the Turtle". There is a children's game in China named 拆牌龜 ("Demolish the Tile Turtle") of unknown age. The computer game was released for free and was played using a CDC-721 touch screen terminal. Control Data Corporation released a new version as a paid online game in 1983. The first version remained available for free. 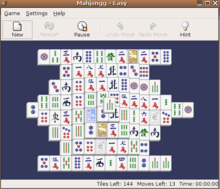 The Mahjongg game bundled with GNOME.

However, it was Activision's release of Shanghai in 1986 for the Amiga Computer, Macintosh and Apple IIgs that popularised the game. The Macintosh version was created by Brodie Lockard (programming and graphics) and the Apple IIGS version was ported from the Macintosh by Ivan Manley with Brad Fregger as the producer. The game became very successful, and around 10 million copies were sold. It has been ported to many different platforms. The name "Shanghai" was trademarked by Activision.

As the game is based on mahjong tiles, some confusion arose with the 4-player mahjong game. Although the name mahjong solitaire is generally accepted, other names include The Turtle as well as brand names Shanghai Solitaire, Taipei, Kyodai and Moraff's. Taipei, originally written by David Norris in 1986, was so named as it was a "cheap clone" of Shanghai.

A version of this game was also included in the Microsoft Entertainment Pack for Windows 3.x in 1990 and went by the name Taipei. It was subsequently included in the Best of Windows Entertainment Pack. Premium editions of the Windows Vista operating system and Windows 7 include a version of the game known as Mahjong Titans (known in Vista build 5219 as Shanghai Solitaire).

Some variations have been ported to Flash and are played online using a web browser.