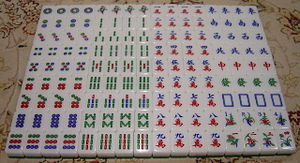 Mahjong tiles (麻將牌 or 麻雀牌; Mandarin: májiàngpái; Japanese: mājampai) are tiles of Chinese origin that are used to play mahjong as well as mahjong solitaire and other games. Although they are most commonly tiles, they may also refer to playing cards with similar contents as well.

Plastic tiles in the middle; tiles using bone and bamboo on the left and right sides

Traditionally, Mahjong tiles were made of bone, often backed with bamboo. Bone tiles are still available but most modern sets are constructed from various plastics such as bakelite, celluloid, and more recently nylon. There are a small number of sets that have been made with ivory or jade, but these are exceedingly rare: most sets sold as ivory are in fact made from bone. Regardless of the material used to construct the tiles, the symbols on them are almost always engraved or pressed into the material. Some expert players can determine the face value of their tiles without actually looking at them by feeling these engravings with their fingers.

There are generally two size categories available, the larger mainland-China size and the smaller Taiwanese/Japanese/American size. However, within the former category (Mainland Chinese), 4 sizes have been roughly standardized:

The length/thickness ratio in all of these must be above 1: 1.5, so that the tiles can steadily stand upright, since Chinese players use no racks to support their tiles in hand during play.

The sizes within the second category (Taiwanese/Japanese/American tiles) have lengths that vary roughly between 3 cm (1-5/32") and 2.5 cm (1"). However, the Japanese tiles set themselves apart within this class by virtue of their thickness, which allows them to stand upright - despite their diminutive overall size. This enables Japanese mahjong players also to dispense with the use of racks (these are pervasive in the American game, in combination with slimmer tiles.)

A set of Mahjong tiles will usually differ from place to place. It usually has at least 136 tiles, most commonly 144, although sets originating from America or Japan will have more.

Mahjong tiles can be organized into several categories:

The majority of Mahjong tiles are of a rank and a suit. There are three money-based suits of tiles (銅索萬), with ranks ranging from one to nine. There are four tiles of each rank and suit combination, thus there are 36 tiles in a suit, and 108 suited tiles in total. To refer to a suited tile, the rank is named, followed by the suit.

The bamboo suit (索子, pinyin suǒzi (woven thread); also 條/条, pinyin tiáo (strip); Japanese romaji sōzu), with the exception of the 1 Bamboo, which is represented by a bird, is represented by outlines of sticks.

The 2, 3, 4, 6, and 8 Bamboo are represented entirely out of blue and green sticks, while the middle stick in the 5 Bamboo, the top stick of the 7 Bamboo, and the sticks along the center column of the 9 Bamboo are red. Some sets may also have the sticks along the bottom row or center column of the 7 Bamboo in blue. The 8 Bamboo has its sticks forming an M-shape and its mirror image.

The 1 Bamboo, as it is often shaped as a bird, is often referred as the sparrow (麻雀 - má què). The rumour why the 1 Bamboo is different from others is to avoid players cheating by adding more Bamboo lines to the 1 Bamboo to change it into other Bamboo tiles. The bird is frequently but not always shown perching on a branch.

From the monetary origin of this suit, the sticks are actually rope strings (索) that tie 100 Chinese copper coins together by the square holes in the middle. (1索=100銅) The repeated bumps in the sticks depict the individual coins in the strings, but they were mistaken as the knots on the bamboo plants, hence the English name of the suit.

The 1 Circle is generally a large circle of multiple colors, while the rest of the circle tiles consist of smaller circles, each circle being of one color. The 2 Circle consists of a green and a blue circle, the 3 consisting of one green, one red, and one blue circle arranged diagonally (the order the circles appear in, as well as the orientation, differs between sets). The 4 Circle has two blue circles and two green circles, arranged in a rectangle with circles of like color in opposite corners. The 5 Circle is similar to the 4 Circle, with another circle (its color depending on the set) in the middle. The 6 Circle consists of two green circles at the top and four red circles in the bottom (with a space between the green and red circles). The 7 Circle is similar to the 6 Circle, but has 3 green circles arranged diagonally from top-left to bottom-right. The 8 Circle has eight blue circles arranged in a 2x4 rectangle. The 9 Circle has three each of green, red, and blue circles, with each color occupying a row. There is some space between each row, and the middle row is always of the red circles (the blue and green, of course, depends on the orientation of the tile).

Because of the large size of the circle in the 1 Circle, it is commonly nicknamed da bing (大餅 pinyin dàbǐng, lit. big pancake).

From the monetary origin of this suit, the circles represent the copper coins known in English as "cash". (1銅=one copper coin).

The ones and nines of each suit (幺九, pinyin yāo jiǔ) are collectively referred to as the terminal tiles.

Each type of Wind tiles corresponds to a point along the compass, written in blue traditional Chinese characters (even for sets where the Character tiles are written in simplified Chinese).

The three types of Dragon tiles are:

The use of the term "dragons" in the West is incorrect. In Chinese they are called the three yuan tiles (三元牌) or the arrow tiles (箭牌).

Flower tiles (花牌 pinyin huāpái, Japanese hanahai or fapai) are further subdivided into groups. Each group contains four unique tiles, which are numbered from 1 to 4 or otherwise distinctly labelled. These tiles usually depict stylised representations of flowers in many colors (hence the name). Nevertheless, other non-floral themes also exist, which vary from set to set. The average set, if it contains flower tiles, will have two groups of flower tiles, differentiating the color and/or style of the labels. Common Chinese sets will have one set of flower tiles with blue Arabic numerals and the other set having red Chinese numerals, numbered one to four.

In mahjong solitaire, the two groups are often called Flower tiles (not to be confused with the blanket term for all groups of flower tiles) and Season Tiles (季牌 jì pái, Japanese 季節牌 kisetsuhai).

In the earliest sets, there were no flower tiles and the season tiles were unadorned.

The four tiles in the Season tile group are:

The four tiles in the Flower tile group, which correspond to the Four Gentlemen in Chinese art, are:

Some Singaporean Mahjong sets provide for a third group of flower tiles by adding two pairs of animal tiles. Some examples of tile pairs include:

Other sets may provide more groups of flower tiles.

Unique to American sets are eight Joker tiles, tiles that simply say "Joker" in a diagonal pattern. Often in Chinese the words 百搭 bǎidā ('a hundred uses') are seen. Four Jokers are sometimes used in certain variants of Southeast Asian and Chinese mahjong, including Shanghainese mahjong. Joker tiles can be used to replace any tile in putting together a hand.

Mahjong tiles were added to the Unicode Standard in April, 2008 with the release of version 5.1.