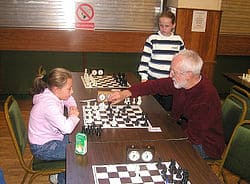 Young and old playing in a chess club

A chess club is a club formed for the purpose of playing the board game of chess. Chess clubs often provide for both informal and tournament games and sometimes offer league play.

Clubs are usually attached to regional chess associations, which are in turn members of their national federation which will be associated with FIDE, the world governing body of chess.

Chess clubs typically provide at least some of the following: