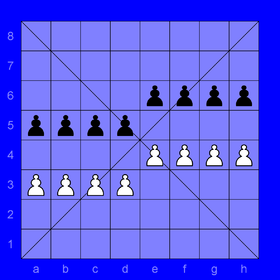 Sittuyin board and starting position

Sittuyin (Burmese: စစ်တုရင်), also known as Burmese chess, is a variant of chess that is a direct offspring of the Indian game of chaturanga which arrived in 8th century AD. Sit is the modern Burmese word for army or war ; the word sittuyin can be translated as representation of the four characteristics of army - chariot, elephant, cavalry and infantry.

In its native land the game has been largely overshadowed by Western (international) chess, although it remains popular in the northwest regions.

The sittuyin board consists of 64 squares, 8 rows and 8 columns, without alternating colors. It also consists of two diagonal lines across the board known as sit-ke-myin (general's lines).

Pieces are commonly made in wood and sometimes in ivory. The height of the pieces is varied by class. The official colors of the pieces are red and black.

Min-gyi (king)
Equivalent to a chess king; it can move one step in any direction. 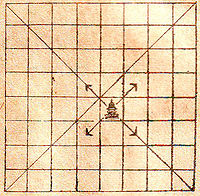 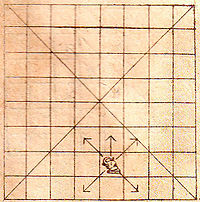 
Sit-ke (general)
Equivalent to a chess queen; it can move one step in any diagonal direction (as fers in shatranj).

Sin (elephant)
Equivalent to a chess bishop; it can move one step in any diagonal direction or one step forward (as silver general in shogi).

Yahhta (chariot)
Equivalent to a chess rook; it can move any number of free squares along four orthogonal directions.

Nè (feudal lord)
Equivalent to a chess pawn; it can move one step forward but cannot retreat. It captures one diagonal step forward as in Western chess. 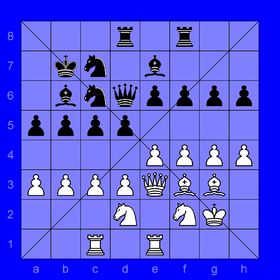 A position after setup phase is complete

Only feudal lords (pawns) are on the board in the initial position. The game starts with the Red player (depicted here having white pieces), followed by the Black player, placing their other pieces arbitrarily on their own halves of the board (known as sit-tee or troops deployment): chariots can be put on any square on the back rank. In official tournaments, a small curtain is used on the middle of the board to prevent the players seeing each other's deployment during the sit-tee phase. One of the possible game openings is shown in the diagram.

The goal of the game is to khwè (checkmate) the opponent's king. Putting the opponent in stalemate is not allowed.

In the version reported in A History of Chess in 1913, a game of sittuyin had three stages:

Anne Sunnucks writes that three dice were thrown and each player made three moves at a time.