Some board games, such as chess and Go, use an adjournment mechanism to suspend the game in progress so it can be continued at another time, typically the following day. The rationale is that games often extend in duration beyond what is reasonable for a single session of play. As in chess, there is sometimes a sealed move, where the next move that would be made is sealed in an envelope, to be played out when the game resumes (normally played by the director or arbiter). This practice ensures that neither player knows what the board position will be when it is their next turn to move. 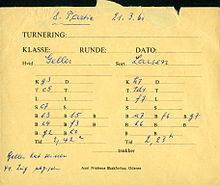 Envelope used for the adjournment of a match game Efim Geller vs. Bent Larsen, Copenhagen 1966

When an adjournment is made, the player whose move it is secretly writes his next move on his scoresheet but does not make the move on the chessboard. He places both his and his opponent's scoresheets in the sealed-move envelope and seals it. The names of the players, the colors, the position, the time on the clocks and other game data are recorded on the envelope; The envelope may also be signed by both players. The arbiter then keeps possession of the envelope until it is time to restart the game, at which time he opens the envelope, makes the sealed move on the board, and starts the opponent's clock.

Schedules allowing for adjournment usually fall into either of two categories:

The rules for adjourning a game of chess are as follows:

The first three rules are designed to encourage players to continue games until the end of the session, but no longer. The last rule ensures that upon adjournment neither player knows what the position will be when it is their next turn to move, maintaining fairness of potential interim analysis of the adjourned positions. However, it can be advantageous to be the player who makes the sealed move, especially if the move forces a specific response from the other player.

Considerations on when to adjourn a game can be complex, and involve an extra dimension of psychology that is not part of strictly logical gameplay.

Adjournments are common in long matches of the game of Go. Major Japanese title matches like the Honinbo, Kisei and Meijin commonly have thinking time of over eight hours per player. Such matches are played over two days and use a sealed move during the adjournment. As in chess, a sealed move may have a forced response, giving an advantage to the sealing player; Sealing a move that has no purpose other than to force a particular answer from one's opponent is considered poor etiquette.

Other games that use adjournments and sealed moves are typically also strategic two player board games, such as xiangqi or shogi.