Tori shōgi (禽将棋 or 鳥将棋, 'bird chess') is a variant of Shogi (Japanese chess), which was invented by Toyota Genryu in 1799 despite being traditionally attributed to his master Ōhashi Sōei. It was first published in 1828 and again in 1833. The game is played on a 7x7 board and uses the drop rule; it is the only traditional Shogi variant besides Wa Shogi to do so. This is one of the more popular shogi variants. There were tournaments in London and Royston in the 1990s and early 2000s.

The objective of the game is to capture your opponent's phoenix. 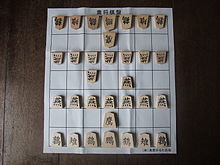 Two players, Black and White (or 先手 sente and 後手 gote), play on a board ruled into a grid of 7 ranks (rows) by 7 files (columns). The squares are undifferentiated by marking or color.

Each player has a set of 16 wedge-shaped pieces, of slightly different sizes. From largest to smallest (or most to least powerful) they are:

In line with the bird theme, each piece is named after a different kind of bird.

Each piece has its name in the form of a kanji written on its face. On the reverse side of some pieces is another character, often in a different color (commonly red instead of black) and are usually cursive; this reverse side is turned up to indicate that the piece has been promoted during play. (The quail are different: on one side is the character for "quail", while on the other is the character for left or right; some people will play with the "left"/"right" side up instead of the "quail" side up.)

The pieces of the two sides do not differ in color, but instead each piece is shaped like a wedge, and faces forward, toward the opposing side. This shows who controls the piece during play.

Listed here are the pieces of the game in English and Japanese:

Below is a diagram showing the setup of the pieces. Black pieces are in bold face in the first diagram, and bigger in the second, and move first:

The players alternate making a move, with Black moving first. (The traditional terms 'black' and 'white' are used to differentiate the sides during discussion of the game, but are no longer literally descriptive.) A move consists of moving a single piece on the board and potentially promoting that piece, displacing (capturing) an opposing piece or dropping a captured piece onto an empty square of the board. Each of these options is detailed below.

Many pieces are capable of several kinds of movement, with the type of movement most often depending on the direction in which they move. The movement categories are:

The step movers are the phoenix, falcon, crane, and the 8 swallows on each side.

The eagle can move along a limited number (2) of free (empty) squares along a straight line in certain directions. Other than the limited distance, it moves like ranging pieces (see below).

The pheasant and goose can jump, that is, they can pass over any intervening piece, whether friend or foe, with no effect on either.

The quail and eagle can move any number of empty squares along a straight line, limited only by the edge of the board. If an opposing piece intervenes, it may be captured by moving to that square and removing it from the board. A ranging piece must stop where it captures, and cannot bypass a piece that is in its way. If a friendly piece intervenes, the moving piece is limited to a distance that stops short of the intervening piece; if the friendly piece is adjacent, it cannot move in that direction at all.

A player's promotion zone consists of the two farthest ranks, at the original line of the opponent's falcon and beyond. If a piece crosses the board within the promotion zone, including moves into, out of, or wholly within the zone, but not including drops (see below), then that player must promote the piece at the end of the turn. Promotion is effected by turning the piece over after it moves, revealing the name of its promoted rank.

Promoting a piece has the effect of changing how that piece moves until it is removed from the board (see above). Only two pieces promote, as follows:

Below are diagrams indicating each piece's movement. Pieces with a grey heading start out in the game; those with a blue heading only appear on the board after promotion. Betza's funny notation has been included in brackets for easier reference.

Captured pieces are truly captured in tori shogi. They are retained "in hand", and can be brought back into play under the capturing player's control. On any turn, instead of moving a piece across the board, a player can take a piece he has previously captured and place it on any empty square, facing the opponent. The piece is now part of the forces controlled by that player. This is termed dropping the piece, or just a drop.

There are three restrictions when dropping swallows:

A swallow may not be dropped on the furthest rank, since it would have no legal move on subsequent turns.

A swallow cannot be dropped into the same file (vertical column) as two other unpromoted swallows controlled by the same player. (A goose, or promoted swallow, does not count as a swallow when considering this drop restriction.)

When a player makes a move such that the opponent's phoenix could be captured on the following move, the move is said to give check to the phoenix; the phoenix is said to be in check. If a player's phoenix is in check and no legal move by that player will get the phoenix out of check, the checking move is also mate, and effectively wins the game.

A player is not allowed to give perpetual check. This is not a rule in itself, but arises from the repetition rule. Either the checker has to break off the checking, or the checked side has to stop evading, after which his phoenix is captured.

The rule for repetition (千日手 sennichite) in tori shogi is that if the same position occurs three times with the same player to play by repetition of moves, the player starting the sequence must vary the move. For two positions to be considered the same, the pieces in hand must be the same, as well as the position on the board.

A player who captures the opponent's phoenix wins the game. In practice this rarely happens, as a player will resign when checkmated, as otherwise when loss is inevitable.

Games between players of disparate strength are often played with handicaps. In a handicap game, one or more of White's pieces is removed before the start of play, and White plays the first move of the game. Note that the pieces removed at the beginning play no further part in the game - they are not available for drops. The imbalance created by this method of handicapping is not as strong as it is in chess, because material advantage is not as powerful in tori shogi as in chess.

The method used in English-language texts to express shogi moves was established by George Hodges in 1976. It is derived from the algebraic notation used for chess, but differs in several respects. Modifications have been made for tori shogi.

A typical example is Sw-6d. The first letter represents the piece moved: Sw = swallow, Q = quail, Pt = pheasant, Cr = crane, Fa = falcon, Ph = phoenix. Promoted pieces have a + added in front of the letter, as +Sw for a goose (promoted swallow). The designation of the piece is followed by a symbol indicating the type of move: - for an ordinary move, x for a capture, or * for a drop. Next is the designation for the square on which the piece lands. This consists of a number representing the file and a lowercase letter representing the rank, with 1a being the top right corner (as seen from Black's point of view) and 7g being the bottom left corner. (This method of designating squares is based on Japanese convention, which, however, uses Japanese numerals instead of letters. For example, the square 2c is denoted by 2三 in Japanese.)

If a move requires the player to promote the piece, then a + is added to the end to signify that the promotion was taken. For example, SWx4a+ indicates a swallow capturing on 4a and promoting.

In cases where the above notation would be ambiguous, the designation of the start square is added after the designation for the piece in order to make clear which piece is meant. For example, if Black has a crane at both 3c and 5c, which can be moved to the square 4b in front of the phoenix, then these are distinguished as Cr5c-4b (moving the left one) and Cr3c-4b (moving the right one). Optionally, a prefix may be added to the quail to distinguish the left quail from the right quail, LQ and RQ, when the left quail appears to the right of the right quail.