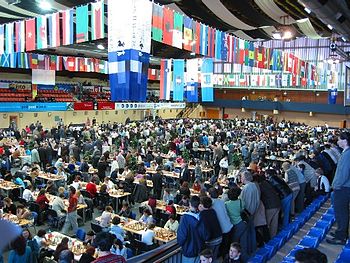 Today, the most recognized chess tournaments for individual competition include the Linares chess tournament (now defunct) and the Tata Steel chess tournament. The largest team chess tournament is the Chess Olympiad, in which players compete for their country's team in the same fashion as the Olympic Games. Since the 1950s, chess computers have even begun entering the tournament scene.

Most chess tournaments are organized and ruled according to the World Chess Federation (FIDE) handbook, which offers guidelines and regulations for conducting tournaments. Chess tournaments are mainly held in either round-robin style, Swiss system style or elimination style to determine a winning party. 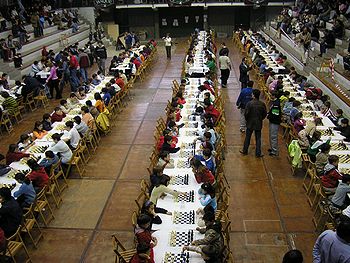 Although modern chess had been established since around 1475, the first tournament (in the sense of structured competitions) was in Leeds in 1841. There was a knockout tournament in London in 1849 and a tournament in Amsterdam in 1851. The first international chess tournament was held in London in 1851. The London 1851 tournament took place during The Great Exhibition, and would serve as a guide for future international chess tournaments that would follow it. The tournament not only showed the need for time controls but it also clearly demonstrated the drawbacks to the knockout elimination tournament format. It was won by Adolf Anderssen of Germany, who became regarded as the world's best chess player as a result. 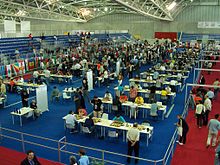 The first chess engine (a chess playing computer program) to beat a person in tournament play was the Mac Hack Six, in 1967. Soon after, tournaments were created just for chess computers. In 1970, the first North American Computer Chess Championship (NACCC) was held in New York City, and in 1974, the first World Computer Chess Championship (WCCC) was held in Stockholm. Kaissa, a chess program of the Soviet Union was named the world's first computer chess champion. In 1995, the first World Computer Speed Chess Championship was held in Paderborn, Germany for blitz chess. Top commercial programs such as Shredder or Fritz have even surpassed world champion players at short time controls.

Rybka has won every World Computer Chess Championship since 2007. It was later found to have plagiarized other programs and had its titles revoked. Other champion level programs include Fritz, HIARCS, Junior, Shredder, and Zappa.

FIDE tournaments are held according to the FIDE handbook rules, which is used as a basic guide for many chess tournaments. The handbook contains nine articles dealing with chess competitions.

A chess clock is a clock with two separate time displays of which only one display can be running at a time. The player with the black pieces will initiate their opponent's timer at the start of the game. Thus the player with the white pieces will have their timer running first, and will make the first move. The player or the arbiter may end the game at any time after the player's opponent has oversteped their time limit. If a timed out clock remains unnoticed, the game will continue as normal. If the game needs to be interrupted, the arbiter shall stop the clock.

If it is found that the starting position of the pieces is incorrect, the game must be cancelled and restarted. If it is found that an illegal move has been made, the game must return to the position directly before the irregularity. For the first illegal move by a player, the arbiter shall give two minutes extra time to his opponent each time. If a player is to make a second illegal move in the same game, the arbiter shall declare the game lost by the offending player. If a game begins with the piece colors reversed, the game should be stopped and restarted unless an arbiter rules otherwise. If a player displaces any pieces, they should place them in the correct locations on their own time. 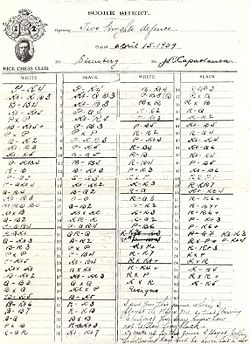 A chess score sheet of a famous match

The recording of moves

In games with long time controls, each player is required to record all moves of the game in algebraic chess notation. However, if a player reaches less than five minutes on their clock, and does not have a time delay of thirty seconds or more, they are excused from recording the remaining game moves until the game has been completed. At the conclusion of the game, both players must sign each other's scoresheets and turn them to the event organizers if instructed to do so. In fast chess games, players are not required to record moves, as it would take away from important thinking time. The scoresheets must be visible to the arbiter at all times. Each player must be familiar with the following chess abbreviations:

A player must make their own move before offering a draw, and must not stop their own clock and start their opponent's clock before they have made the offer. No conditions may be attached to a draw offer. If a player claims a draw according to the rules of chess, the player is allowed to stop both clocks and record the draw claim as long as his or her opponent agrees to the claim. If the opponent disputes the draw claim the director may be called to come to a conclusion. If the claim is found to be correct, the game is drawn. Once a player has made a move from a position eligible for a draw, they lose their rights to claim a draw on that position.

The quickplay finish is the phase of the game when all remaining moves must be made in a limited time. If a player has two minutes or less left on their clock, they may ask the arbiter to adjudicate a draw. The arbiter must decide if the player's opponent is making any attempt to win the game by normal means, or if the position can be won in any way. If the arbiter decides against a draw, the player's opponent will be awarded two extra minutes of time. Otherwise, the game is drawn, and the decision of the arbiter is final.

Players are granted one point (1) for a win, a half (½) point for a draw, and no points (0) for a loss toward their tournament score, unless otherwise stated by the tournament director beforehand. Full-point byes are received when a player is excluded from a round because of an extra player. Thus, in tournaments with an odd number of players, a different player will receive a full-point each round. A full-point bye is equal in points to a normal win. Half-point byes can be requested by a player who will be unavailable for a round. If accepted, the player will receive a half-point, as if they had drawn the game. A player who wins by forfeit or default will also be granted one point. Players may use the following format to record the game score:

Players are not allowed to take any action that will bring the game into disrepute. For example, deliberate attempts at cheating by sneaking a captured piece back on to the board can be punished by this rule, rather than the rules dealing with illegal moves.

Players can not make any use of any outside information. This includes advice, notes, and analysis of another chess board. Electronic devices are not to be used in the tournament area unless approved by the arbiter. If a player's mobile phone rings during play, they may immediately forfeit the game. Chess scoresheets may be used for recording matters relevant to the game. Players should not distract or annoy their competitor in any way. Once a player has finished their game, they are considered a spectator. Refusal of a player to comply with the rules may result in penalty, up to and including forfeiture of the game or even disqualification of the player. If two opponents both refuse to obey the rules, the game may be considered lost by both players. In 1976, smoking was banned in a major tournament for the first time (the National Open, Las Vegas).

The role of the arbiter

The arbiter's job is to see that the Laws of Chess are observed and make decisions in the best interest of the competition, but must not interfere with the game otherwise. If a rule is broken, the arbiter may choose from a number of penalties including the following:

The arbiter may also expel offending spectators from the venue. Spectators are also forbidden to use mobile phones at any time in the playing area, and may be expelled for it. Member federations are allowed to ask FIDE authorities to give an official decision about problems relating to the Laws of Chess.

Most chess tournaments are held in either round-robin style, Swiss system style or single-elimination style.

A tournament that has too many participants for a round-robin is commonly conducted as a Swiss system tournament. In the Swiss style, players are paired with opponents who have done equally well. For example, players with six points will play other players with six points (if possible), so that the player with the most points at the end of the tournament is the winner. Pairing players for Swiss system tournaments is often quite complicated, so tournament organizers commonly use a computer to pair players. 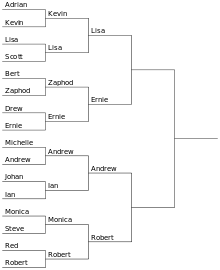 The physically handicapped are often welcomed to compete in chess tournaments. Although the Blind Chess Olympiad is the most significant chess event for the blind and visually impaired, players in either group can participate at most standard tournaments including international ones. In some cases, specially designed chess boards with raised squares and pegs are used to aid the visually handicapped, while a tournament assistant can be used to help players with other physical handicaps.

A time control is a mechanism in tournament play that allows each round of the match to finish in a timely fashion so that the tournament can proceed. The three main types of time controls used in chess tournaments are blitz, standard, and compensation.

In blitz chess (also known as sudden death chess) each player starts with a fixed amount of time to spend on their moves of the game. The FIDE Handbook designates the following common blitz time controls:

Blitz time controls increase the odds that one would "lose on time", meaning a forfeiture of the game due to the expiration of one's chess clock. Blitz tournaments are often documented with the notation "G/5" or "G/15", meaning "game in 5" and "game in 15", respectively.

Standard time controls (STC) are one's in which a player has a set amount of time to complete a specified number of moves. If the specified number of moves is met, the player's time will rejuvenate. The first standard time controls, introduced in 1861, were 24 moves in two hours, with the average game lasting five hours. In the mid-1980s, a new format, 40 moves in two hours, proved popular because few games lasted over 60 moves.

Compensation (also known as incremental or delay) time control methods require the use a special clock, called a delay clock. There are two main forms which provide compensation for both the time lost in physically making a move and to make it such that a player can avoid having an ever-decreasing amount of time remaining.