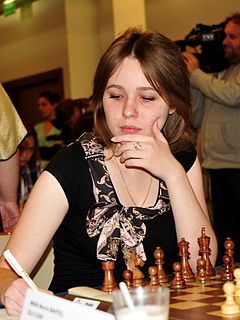 The Women's World Championship was established by FIDE in 1927 as a single tournament held alongside the Chess Olympiad. The winner of that tournament, Vera Menchik, did not have any special rights as the men's champion did - instead she had to defend her title by playing as many games as all the challengers. She did this successfully in every other championship in her lifetime (1930, 1931, 1933, 1935, 1937 and 1939). 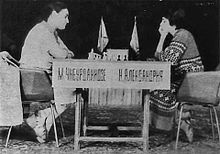 Menchik died, still champion, in 1944 in a German air raid on Kent. The next championship was another round-robin tournament in 1949-50 and was won by Lyudmila Rudenko. Thereafter a system similar to that of the men's championship was established, with a cycle of Candidates events (and later Interzonals) to pick a challenger to face the reigning champion.

The first such Candidates tournament was held in Moscow, 1952. Elisabeth Bykova won and proceeded to defeat Rudenko with seven wins, five losses, and two draws to become the third champion. The next Candidates tournament was won by Olga Rubtsova. Instead of directly playing Bykova, however, FIDE decided that the championship should be held between the three top players in the world. Rubtsova won at Moscow in 1956, one-half point ahead of Bykova, who finished five points ahead of Rudenko. Bykova regained the title in 1958 and defended it against Kira Zvorykina, winner of a Candidates tournament, in 1959.

The fourth Candidates tournament was held in 1961 in Vrnjacka Banja, and was utterly dominated by Nona Gaprindashvili of Georgia, who won with ten wins, zero losses, and six draws. She then decisively defeated Bykova with seven wins, no losses, and four draws in Moscow, 1962 to become champion. Gaprindashvili defended her title against Alla Kushnir of Russia at Riga 1965 and Tbilisi/Moscow 1969. In 1972, FIDE introduced the same system for the women's championship as with the men's: a series of Interzonal tournaments, followed by the Candidates matches. Kushnir won again, only to be defeated by Gaprindashvili at Riga 1972. Gaprindashvili defended the title one last time against Nana Alexandria of Georgia at Pitsunda/Tbilisi 1975.

Chiburdanidze's domination ended in Manila 1991, where the young Chinese star Xie Jun defeated her, after finishing second to the still-active Gaprindashvili in an Interzonal, tying with Alisa Marić in the Candidates tournament, and then beating Maric in a tie-breaker match.

It was during this time that the three Polgar sisters Susan (also known as Zsuzsa), Sofia (Zsófia), and Judit emerged as dominant players. However they tended to compete in men's tournaments, avoiding the women's championship.

Susan Polgar eventually changed her policy. She won the 1992 Candidates tournament in Shanghai. The Candidates final - an eight game match between the top two finishers in the tournament - was a drawn match between Polgar and Ioseliani, even after two tiebreaks. The match was decided by a lottery, which Ioseliani won. She was then promptly crushed by Xie Jun (81⁄2-21⁄2) in the championship at Monaco 1993.

The next cycle was dominated by Polgar. She tied with Chiburdanidze in the Candidates tournament, defeated her easily in the match (51⁄2-11⁄2), and then decisively defeated Xie Jun (81⁄2-41⁄2) in Jaén 1996 for the championship.

In 1997, Russian Alisa Galliamova and Chinese Xie Jun finished first and second, but Galliamova refused to play the final match entirely in China. FIDE eventually awarded the match to Xie Jun by default.

However, by the time all these delays were sorted out, Polgar had given birth to her first child. She requested that the match be postponed. FIDE refused, and eventually set up the championship to be between Galliamova and Xie Jun. The championship was held in Kazan, Tatarstan and Shenyang, China, and Xie Jun won with five wins, three losses, and seven draws.

In 2000 a knock-out event, similar to the FIDE men's title and held alongside it, was the new format of the women's world championship. It was won by Xie Jun. In 2001 a similar event determined the champion, Zhu Chen. Another knock-out, this one held separately from the men's event, in Elista, the capital of the Russian republic of Kalmykia (of which FIDE President Kirsan Ilyumzhinov is president), from May 21 to June 8, 2004, produced Bulgarian Antoaneta Stefanova as champion. As with Polgar five years prior, Zhu Chen did not participate due to pregnancy.

In 2006 the title returned to China. Interestingly, the new champion Xu Yuhua was pregnant during the championship.

In 2010 the title returned to China once again. Hou Yifan, the runner-up in the previous championship, became the youngest ever women's world champion at the age of 16. She beat her compatriot WGM Ruan Lufei 2-2 (classic) 3-1 (rapid playoffs). 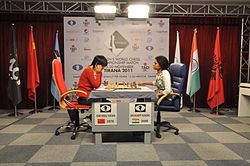 Beginning from 2010, the Women's World Chess Championship would be held annually in alternating formats. In even years a 64-player knockout system would be used, in the odd years a classical match featuring only two players would be held. The 2011 edition was between the 2010 champion Hou Yifan and the winner of the FIDE Women's Grand Prix 2009-2011. Since Hou Yifan won the Grand Prix, her challenger was the runner-up, Koneru Humpy.

Hou Yifan was knocked-out in the second round in Women's World Chess Championship 2012, which was played in Khanty Mansiysk. Anna Ushenina, seeded 30th in the tournament, won the final against Antoaneta Stefanova 31⁄2-21⁄2.

The Women's World Chess Championship 2013 was a match over 10 games between defending champion Anna Ushenina and Hou Yifan who had won the FIDE Women's Grand Prix 2011-2012. After seven of ten games Hou Yifan won the match 5.5 to 1.5 to retake the title.

After Hou declined to defend her title at the Women's World Chess Championship 2015, the title was won by Mariya Muzychuk, who defeated Natalia Pogonina in the final.

Muzychuk and Hou are expected to play each other in the Women's World Chess Championship 2016.