Humpy Koneru (born 31 March 1987 in Gudivada, Andhra Pradesh) is an Indian chess Grandmaster. In October 2007, she became the second female player, after Judit Polgár, to exceed the 2600 Elo rating mark, being rated 2606.

In 2002, Koneru became the youngest woman ever to achieve the title of grandmaster (not solely a Woman Grandmaster) at the age of 15 years, 1 month, 27 days, beating Judit Polgár's previous mark by three months; this record was subsequently broken by Hou Yifan in 2008.

She was originally named "Hampi" by her parents, who derived the name from the word "champion". Her father later changed the spelling to Humpy, to more closely resemble a Russian-sounding name.

Koneru won three gold medals at the World Youth Chess Championship: in 1997 (Under-10 Girls division), 1998 (Under-12 Girls) and 2000 (Under-14 Girls). In 2001, she won the World Junior Girls Championship. In the following year's edition, she finished equal first with Zhao Xue, but placed second on tiebreak. Koneru competed with the boys in the 2004 World Junior Championship, won by Pentala Harikrishna, and finished equal fifth, tenth on countback with a score of 8.5/13.

She participated in the Women's World Chess Championship 2006: after defeating Tuduetso Sabure from Botswana, she was eliminated in the second round by Marie Sebag. In the Women's World Chess Championship 2008 she made it to the semifinals, but was beaten by Hou Yifan. In 2009 she tied for 1st-4th with Alexander Areshchenko, Magesh Panchanathan and Evgenij Miroshnichenko in the Mumbai Mayor Cup.

In 2009, Koneru accused the All India Chess Federation of preventing her from participating in the 37th Chess Olympiad in Turin. Her father Koneru Ashok who was coaching her was not allowed to travel with her for tournaments. The controversy has not died down. Later that year, the AICF was also embroiled in a controversy with Geetha Narayanan Gopal.

In August 2014 she married Dasari Anvesh.

She went into the Women's World Chess Championship 2015 as no. 1 seed, but was knocked out in the quarter-final by Mariya Muzychuk, the eventual winner.

She won the individual bronze at the Women's World Team Chess Championship 2015 held in Chengdu, China. Despite Dronavalli Harika's silver and Humpy's bronze, India finished fourth in the competition - a point behind China, which bagged the bronze medal. 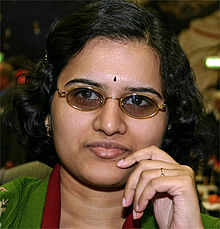