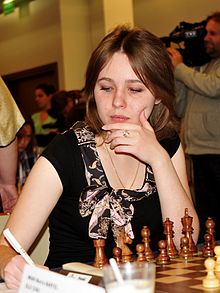 Mariya Muzychuk, winner of the championship.

The Women's World Chess Championship was held from 16 March to 7 April 2015 in Sochi, Russia. It was a 64-player knockout tournament. It was originally scheduled from 11 to 31 October 2014 but problems in finding a sponsor and host city eventually forced international chess organisation FIDE to announce the postponement of the Championship on 24 September 2014, scheduling it for early 2015 in Sochi. The unclear state of the tournament was highly criticised by the Association of Chess Professionals (ACP).

In the final, Ukrainian Mariya Muzychuk, seeded 8th, defeated Russian Natalia Pogonina, seeded 31st. She will defend her title in a 2016 match against Hou Yifan. 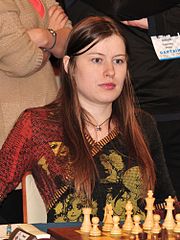 Natalia Pogonina, finalist of the championship

The qualified players were announced on 22 January 2015, subject to signing the contract.

Notably, women's world number one and defending champion Hou Yifan from China opted not to play, because of a prior commitment to a chess tournament in Hawaii. Also absent from the world top-10 were Nana Dzagnidze and Kateryna Lagno (they were replaced by two spots from E13).

The participating players were seeded by their March 2015 FIDE rating (shown after the players below).

Nationalities in the field

Russia sends the most players with ten, one more than China.

Two days per match were followed by possible tie-breaks on the next day if the match was tied. The only rest day was 1 April the day after the semi-finals.

The final was the only match of the tournament which consisted of four classical games (from 2 to 5 April 2015), played on consecutive days with a rest-day between the semi-final tie-breaks and match 1. Eventual tie-breaks were played on 6 April 2015, in the same manner as the whole tournament. Two rapid games (25+10), i.e. 25 minutes for the whole game plus 10 seconds increment, the two rapid games (10+10), two blitz games (5+3) and an armageddon decider. In the final game White pieces belonged to Muzychuk, who opened the game with her favorite 1.е4. Pogonina responded with her favorite 1…е5. In the Scotch Four Knights Game she tried to avoid the main variations by putting the bishop to b4 via c5. The idea allowed Black to duck the home preparation of Muzychuk. White, however, achieved a spatial advantage and overall more favorable game after the opening. Later White decided to advance kingside pawns, weakening own king. The Black also had pawn weaknesses and a sharp and dynamically balanced position emerged. On the move 41 Muzychuk carried out a simplifying combination, transposing to an endgame with two strong passed pawns against a knight. Pogonina was left with no winning chances, and the game ended in a draw on the move 56 after the move repetition.

Pogonina had the white pieces in the first game. Before the final they had met only once, in the 2007 European Individual Championships, which ended in a draw.

Players were seeded by their March rating. The standard bracket is used, i.e. seed #1 plays #64, #2 plays #63 and so on. The draw of who plays white first is done at the opening ceremony. Pairings published on 3 March.