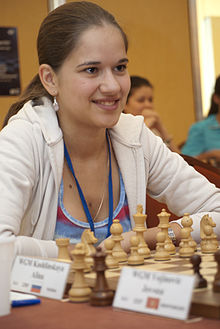 Alina Kashlinskaya (born October 28, 1993 in Moscow) is a Russian chess player who holds the titles of International master and Woman grandmaster.

In 2003, Kashlinskaya was the runner up at the European Under-10 Girls Chess Championship.

In August 2010, she was part of the Russian women's team in the 7th China-Russia Match, held with the Scheveningen system.

Kashlinskaya took part in the 39th Chess Olympiad (Women) playing for Russia B team and won the silver medal on fifth board.

In 2011, she took silver in the World Under-18 Girls Championship.

In 2013, she won the Russian Junior (Under-20) Girls Championship and came third in the World Junior Girls Championship. In the same year, she participated in the 6th "Snowdrops vs Old Hands" match: she scored 5/8, helping her team "Snowdrops" (Viktorija Cmilyte, Kashlinskaya, Mariya Muzychuk, Nastassia Ziaziulkina) to defeat the "Old Hands" (Josif Dorfman, Boris Gulko, Borislav Ivkov, Wolfgang Uhlmann) with the overall score of 17.5-14.5. Kashlinskaya was the top scorer of the whole event.

Kashlinskaya competed in the Women's World Chess Championship 2015, but was knocked out in the first round by Shen Yang.

In May 2015, she won bronze at the Women's European Individual Championship in Chakvi. In July 2015, she took part in the 9th China-Russia Match and scored 2.5/5, the best result among the Russians in the women's section. In September 2015, Kashlinskaya won the 5th Krystyna Hołuj-Radzikowska Memorial - Women Grandmaster tournament in Wrocław.

Kashlinskaya is married to Radosław Wojtaszek.