Sometimes, minor pieces are sacrificed so that a pawn can have a clear path to promotion on the eighth rank. In the example at the right (Botvinnik versus Capablanca, AVRO 1938), in order to capitalize on the passed pawn on e6 and break its blockade by Black's queen, White continued 30. Ba3! Qxa3 31. Nh5+! gxh5 32. Qg5+ Kf8 33. Qxf6+ guaranteeing the e-pawn's promotion. The passed pawn's value is well worth the sacrifice of both the knight and bishop because it clears the path of the black queen and knight. The only pieces preventing the e-pawn's promotion are the black queen and knight, and once they are gone, the e-pawn has a free path to promotion because Black's pawns are helpless to stop it. Had there been a black pawn on the seventh rank that challenges the advancement of the e-pawn, it could have stopped the progress of the white pawn.

Fischer-Larsen 1971
White to move, wins because of the outside passed pawn.

An outside passed pawn is a passed pawn that is on or near the left or right edge of the board, and is separated by a number of files from the rest of the pawns. Such a pawn often constitutes a strong advantage for its owner because the opposing king does not have the range to cover both sides of the board.

In the position on the right from the fifth game of the 1971 Candidates match between Bobby Fischer and Bent Larsen, the outside passed pawn on the a-file confers White a winning advantage, even though material is equal. The pawn will force Black's king to keep it from queening, leaving White's king free to capture Black's remaining pawns and win the game. White wins with:

Passed pawns in the endgame

White, on move, creates a passed pawn and wins. 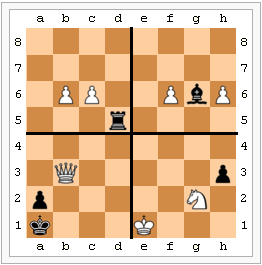 Since passed pawns have no opposing pawns to stop them, the threat of queening often forces the opponent to use a piece to block or capture the pawn, wasting valuable time and immobilizing material or possibly even losing it (as when a defender of the blocking piece is forced to move). Indeed, the value of a far-advanced passed pawn or pawn group is often equal to or even greater than that of a piece. Four examples of this are seen in the diagram at right. In the upper-left quadrant of the board, White's connected passed pawns on the sixth rank are superior to Black's rook. Even if on move, Black cannot stop one of White's pawns from queening. Similarly, in the upper-right quadrant, Black's bishop cannot hold back both of White's pawns. White queens a pawn after 1. f7 (1.h7 also works) Bxf7 2. h7 followed by 3. h8=Q. In the lower-left quadrant, White's queen cannot stop Black's pawn from queening without stalemating Black. The lower-right quadrant highlights how awkward a knight is in dealing with a passed pawn, especially a rook pawn. White's knight is actually worse than useless in trying to stop Black's pawn. It cannot do so itself, and if White's king (which could catch the pawn if the knight were not there) approaches with 1. Kf2 (hoping for 1...hxg2? 2.Kxg2), Black plays 1... h2! and 2... h1=Q.

A striking (albeit very unusual) example of the power of passed pawns is seen in the position at left, the conclusion of an endgame study by Leopold Mitrofanov. Black, with a queen, bishop, and knight, is helpless against White's two passed pawns, which threaten both 10.b7# and 10.c8=Q+ Bb8 11.b7#.