Nana Dzagnidze (Georgian: ნანა ძაგნიძე; born 1 January 1987) is a chess player from Georgia, who achieved the title of International Grandmaster in 2008. She was the best individual female player during the 41st Chess Olympiad in Tromso, Norway, ahead of Hou Yifan.

She has been a regular board two for Georgia's Women's Olympiad team and helped them reclaim the gold medal at Dresden in 2008, scoring a very useful 7/10. This was also the year that she was awarded her full GM title.

Dzagnidze's record at the European Team Chess Championship has been no less impressive, taking a team silver medal at the 2005 women's event and an individual board four gold medal in 2007. 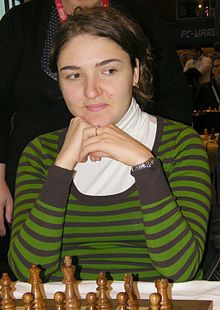 At the Dresden Olympiad

Despite some leveling off of her tournament performances in the period 2003-2007, she made a significant leap in the last quarter of 2008 and playing more chess than ever, continued the upsurge into 2009, registering her highest Elo rating and rising to eighth on FIDE's list of 'Top 100 Women', higher than Women's World Champion Alexandra Kosteniuk.

In July 2010 she won the women's Grand Prix tournament, the fourth of six such tournaments as part of the Women's World Chess Championship cycle for 2011. She won seven games and drew four, in the eleven-round round-robin tournament. She finished 1½ points ahead of second-place finisher Tatiana Kosintseva.