Along with elder sister Nadezhda, the six-year-old Tatiana became a chess player by virtue of a twist of fate. Wandering home from dance lessons with their mother, the pair happened upon a chess club and decided then and there to take up the game.

As a youngster, she recalls being inspired by a book of former World Champion Alexander Alekhine's games and was similarly impressed by the games of Garry Kasparov and Bobby Fischer.

Soon after, she became a fearsome competitor at the top level of junior chess, her collection of tournament prizes rivalling even her sister's haul. At the World Youth Chess Championship, she earned silver medals at the Under-10 (Cala Galdana, 1996) and Under-12 (Cannes, 1997) events. In the Under-10 category of the 1996 European Youth Chess Championship held at Rimavska Sobota she went one better, that time taking home the gold medal. Silver medals were added at the Euro events in Mureck (1998) and Kallithea (2000), at Under-12 and Under-18 levels, respectively. 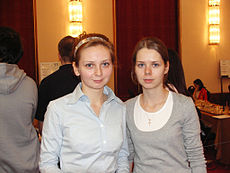 In 2004 she also won the Accentus Ladies Tournament at the Biel Chess Festival.

Sharing a mutual talent for chess, the sisters are also close companions outside the game; both attend a law course at Pomor University in their hometown and study together. Inevitably, they play side by side in team competitions, most notably at the Chess Olympiad as part of the Russian Women's national team.

Tatiana Kosintseva was also the winner of the 2007 Women's European Individual Chess Championship with a tournament performance rating (TPR) of 2774, and won again in 2009 with a TPR of 2551.

In 2012 she won the European Women's Rapid Chess Championship in Gazientep, Turkey.