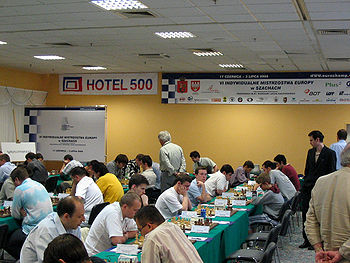 View of the tournament hall from the Men's (Zegrze) 2005 event

The European Individual Chess Championship is a chess tournament organized by the European Chess Union. It was established in 2000 and has since then taken place on a yearly basis. Apart from determining the European Champion, another object of this tournament is to determine a number of players who qualify for the FIDE world cup.

A tournament purporting to be the first European Championship (Europameisterschaft) was held in Munich, 14-26 September 1942, organised by Ehrhardt Post, the Chief Executive of Nazi Grossdeutscher Schachbund. But given that players from Germany's enemies (Soviet Union, Great Britain and Poland) were unable to participate (because of World War II), and Jewish players barred (because of Nazi policy), this tournament was simply a manifestation of Nazi propaganda and has never received any form of official recognition as a championship.

The tournament is held separately for men and women as a Swiss system tournament, with a varying number of rounds. The only exception was the first Women's Championship tournament in 2000, which was held as a knock-out-tournament. As with all chess competitions, the "men's" section is in fact an open tournament in which female players may participate, but not vice versa. In 2002, Judit Polgár narrowly missed the bronze medal in the men's competition by losing a play-off match against Zurab Azmaiparashvili. In 2011, Polgar won the bronze medal in the men's competition at Aix-les-Bains, France.

Apart from the first edition in 2000, where in case of a tie the Buchholz-Rating was used as a tie-breaker, rapid-play play-off matches were used to determine the medal winners as well as the world championship qualifiers.

A number of recurrent issues have been marring the event from the very beginning: