Teimour Radjabov (also spelled Teymur Rajabov; Azerbaijani: Teymur Rəcəbov; born 12 March 1987) is an Azerbaijani chess Grandmaster and former chess prodigy. On the June 2015 FIDE list, Radjabov has an Elo rating of 2738, making him No. 1 in Azerbaijan and 22nd in the world. He has twice qualified for the Candidates Tournament (the winner of which earns a World Championship match), in 2012 and 2013.

Radjabov earned the title of Grandmaster in March 2001 at the age of 14, making him the second-youngest grandmaster in history at the time. In Linares 2003, not yet 16 years old, he became the first player in seven years to beat Garry Kasparov with the black pieces in a rated game, a feat no player repeated before Kasparov's retirement two years later. During Radjabov's earlier career, his playing style was described as attacking and tactical. He advocated the King's Indian Defence, as well as various dynamic openings against 1.e4, such as the Sicilian Sveshnikov or the Sicilian Dragon. Later Radjabov developed into a more universal player, focused on gaining a small but decisive edge with White, while keeping his trademark dynamism with the black pieces.

Radjabov was born in Baku to an English language teacher, and a petroleum engineer.

Being the youngest of the participants Radjabov won the European Under 18 Championship, with the six years older Evgeny Postny in second place.

While still being 13 years old the 2483-rated Radjabov finished in second place in Wijk aan Zee B, scoring +6 −2 =3. Mikhail Gurevich (2694) in first place was ½ point ahead and the player to qualify for next year's Wijk aan Zee A.

Radjabov is the second youngest player ever, after Judit Polgar, to make it into the FIDE Top 100 players list. With a rating of 2599 in January 2002 he was ranked 93rd in the world while still 14 years old. In the FIDE Moscow Grand Prix rapid event in June he won matches against Ivanchuk, Svidler, Beliavsky and Akopian before losing the final to Kasparov ½-1½.

In 2003 Radjabov defeated Garry Kasparov, Viswanathan Anand, and Ruslan Ponomariov with the black pieces, making him the first player to have beaten three former and reigning FIDE World Chess Champions with black in one year. Hikaru Nakamura repeated the feat in 2011 by beating Ponomariov, Anand and Vladimir Kramnik.

Radjabov's win against Ponomariov came in Wijk aan Zee, where Radjabov scored +3 −3 =7, while the one against Anand came in Dortmund, where he scored +2 −2 =6. The win against Kasparov in Linares was Radjabov's only win in the tournament, where he ended up with a +1 −4 =7 score. Kasparov had been undefeated in five consecutive Linares tournaments before losing to Radjabov. He had not lost a rated game with white in seven years, and never lost one again.

Radjabov once again participated in Linares where he scored +2 −2 =8 and shared fourth place with Veselin Topalov, one point behind winner Vladimir Kramnik, after drawing both his games against Garry Kasparov. He also reached the semifinals (earning a bronze medal) at the FIDE World Chess Championship 2004.

Radjabov won Dos Hermanas in April, ahead of among others Dreev and Azmaiparashvili. Later in the year he finished second in the European Championship, behind Nisipeanu but with Karjakin, Ivanchuk and Aronian in third to fifth place.

On February 22 Radjabov defeated FIDE World Champion Veselin Topalov (2801) with the black pieces and subsequently finished second in Linares/Morelia after scoring +4 −2 =8 in the tournament.

In November Radjabov won the strong Cap d'Agde rapid tournament. He won all his games in quarter and semi finals against Volokitin and Bacrot, and went on to win the final against Sergey Karjakin (who had eliminated Magnus Carlsen in his semi final) 1½-½.

In December, during the Creativity Festival in Florence (Tuscany, Italy), Radjabov lost a game against Deep Junior, the chess engine that won the Turin World Computer Chess Championship. 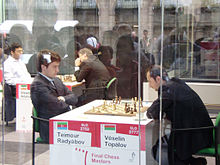 Radjabov against Veselin Topalov in Bilbao, 2008

In January Radjabov shared first place at the Category 19 Corus Chess Tournament in Wijk aan Zee with Veselin Topalov and Levon Aronian, ahead of Kramnik and Anand. He scored five wins, one loss and seven draws.

Radjabov was also to play the Morelia/Linares Tournament 2007, but due to a robbery of some of his belongings in Mexico, he withdrew from the tournament. His position was taken by Vassily Ivanchuk.

In January Radjabov won the ACP Rapid Cup in Odessa after beating Grischuk in the final 2-5-1½. Later the same month he shared third in Wijk aan Zee together with World Champion Viswanathan Anand after beating him with white, finishing ½ from first (+3 −1 =9). Radjabov had an average Linares (+2 −2 =8), and a disappointing Baku (+2 −3 =8), but finished third in Sofia (+2 −1 =7), behind Ivanchuk and Topalov. In Sochi in August he finished second (+5 −2 =6) behind Aronian, and capped a very active tournament year by sharing first in Elista (+4 −1 =8).

In Wijk aan Zee Radjabov shared second place with Aronian and Sergei Movsesian, ½ behind winner Sergey Karjakin. He finished fifth on tiebreak in Linares after scoring his only win in the tournament against Aronian, and was undefeated in Bazna in June, even if he only won once, against Gata Kamsky. In October Radjabov led the Azerbaijani team to victory at the European Team Chess Championship in Novi Sad.

In his Candidates quarter final in Kazan Radjabov was eliminated by Vladimir Kramnik in blitz tiebreak, after a controversial incident of chess clock malfunction.

Radjabov got married October 7 after a spectacular performance rating of 3019 in the European Chess Cup Championships playing first board for the team SOCAR, with the team coming second overall. Later the same month Radjabov led the Azerbaijani team to silver medals at the European Team Chess Championship in Porto Carras. In November he reached a new peak rating of 2781.

In January Radjabov competed in the Tata Steel Chess Tournament in Wijk aan Zee; the field included among others world No. 1 Magnus Carlsen and world No. 2 Levon Aronian. The average rating of the field was 2755, making this thirteen-round event a category 21 tournament. Radjabov scored +3 −0 =10 and tied for second place with Magnus Carlsen and Fabiano Caruana, a point behind winner Levon Aronian. It was his fourth consecutive top three finish in Wijk. In the even stronger Tal Memorial (category 22 with an average rating of 2776) he shared second place again (+2 −1 =6), behind winner Carlsen, and reached a new peak rating and ranking as No. 4 with 2788 on the July list. Radjabov also competed as first board in the 2012 Olympiad in Istanbul Turkey 2012, and as a result pushed his rating from 2788 to his personal all-time high of 2793, and received second highest performance on the first board. On October 17 Radjabov led the SOCAR chess team to a win in the European Chess Club Cup by playing on the first board, and again received second highest performance on his board.

Radjabov played in the 2013 Candidates Tournament, which took place in London, from 15 March to 1 April. He finished last, with +1−7=6.

Radjabov's national team won at the European Team Chess Championship in November 2013 in Warsaw, Poland. Radjabov scored 4½/8 (+1−0=7) in the tournament.

Radjabov is almost single-handedly responsible for the current revival of the King's Indian Defence. He even beat world number one, Magnus Carlsen, with this defense in 2014 at the Gashimov Memorial 2014. He is also the only top player to consistently employ the sharp Schliemann Defence in the Ruy Lopez, scoring +1 −0 =10 with it in top tournaments 2008-11, drawing among others Carlsen, Anand, Topalov, Svidler, Ivanchuk and Karjakin, and beating Adams. Radjabov has been called an excellent counter-attacker, adept at seizing control after an opponent makes a minor mistake.

Radjabov's name is often mentioned in conjunction with that of former world champion Garry Kasparov. Hans Ree notes, "They are both born and raised in Baku, both shed the Jewish names of their fathers and both have profited of the patronage of the political leader of Azerbaijan, Heydar Aliyev." Radjabov's lifetime score against Kasparov at standard time controls is one win, three draws and no losses. (Kasparov's only win was in rapid chess.)

At the 2003 Linares chess tournament, Radjabov, who was 15 years and 11 months at the time, famously defeated Kasparov with the black pieces. The game was voted the most beautiful game of the tournament, generating an angry outburst from Kasparov.

Position after 21.Be2. Radjabov (Black) surprises Kasparov by sacrificing a knight for the initiative.

Radjabov's knight sacrifice, 21...Ngxe5, was praised by several strong players for its bravery, including English grandmaster Nigel Short. Said Short of the move:

Radjabov plays very imaginatively... he just won't give up, he is extremely tenacious and will always find a way to muddy the waters to throw you off track. He is very good at finding disconcerting moves. Here he unbalances Kasparov completely, disturbing his rhythm of play. The move probably caused the Great Player to fall off his chair. ... Instead of simply allowing Kasparov to grind him down he unbalanced the game with his knight sacrifice, and six moves later Kasparov had blundered. That was the point of Radjabov's sacrifice - it was not sound but it gave him these practical chances.

However, the sacrifice was called "desperation" by GM Miguel Illescas, and according to Chessbase.com, "The Grandmasters we have talked to praised Radjabov's resilience in a bad position but criticized the game as unworthy of a prize because it was based on blunders."

Considered to be the decisive mistake.

White cannot recapture the bishop due to the immediate threat of Qg6.

Radjabov became the first player born since Kasparov first became World Chess Champion in 1985, to defeat him. Radjabov is also the youngest player in history to defeat a reigning world No. 1 in a game at tournament time controls.

Radjabov's results against World Champions have been quite good. In classical games against Garry Kasparov his career score is +1 −0 =3, while he is -1 against Anand and has drawn all his classical games against Kramnik after two losses in 2003. Against FIDE World Champions Ponomariov and Kasimdzhanov he has undefeated plus scores while he is equal against Topalov. Radjabov's career scores against some current and previous top players (April 2014, not counting rapid/blitz):

In an interview in 2005 Radjabov said that Kasparov used his influence to prevent Radjabov from being invited to top tournaments, after Radjabov scored well against him at Linares 2003 (+1 =1).

In 2007, on a question on how he felt about playing against the Armenian team, an Azerbaijani news agency quoted Radjabov as saying: "We all have feelings of hate towards them." Radjabov claimed that the statement had been attributed to him "in a supernormal form", and that while "we do not have simple relations with Armenia", he would "never stoop to pathological nationalism".

On May 2006 he was appointed as the UNICEF National Goodwill Ambassador for Azerbaijan. He advocates for the cause of the universal salt iodization in the country. UNICEF Representative in Azerbaijan Hanaa Singer stated that they were very pleased to have Teimour in the work to improve the lives of children and young people in Azerbaijan. They were confident that Teimour would become an outspoken and active advocate for the cause, using his great talents to inspire young people.