Levon Grigori Aronian (Armenian: Լևոն Գրիգորի Արոնյան; born 6 October 1982) is an Armenian chess Grandmaster. On the March 2014 FIDE rating list, he was ranked number two in the world and had an Elo rating of 2830, making him the fourth highest rated player in history.

Aronian has been the leading Armenian chess player since the early 2000s. His popularity in Armenia has led to him being called a celebrity, and a hero. He was named the best sportsman of Armenia in 2005 and was awarded the title of Honoured Master of Sport of the Republic of Armenia in 2009.

Aronian was born on 6 October 1982 in Yerevan, Armenia (then part of the Soviet Union), to Seda Aronova-Avagyan, an Armenian mining engineer, and Grigory Leontievich Aronov, a Jewish physicist. Talking about his background, Aronian stated in an interview, "I feel much more Armenian than Jewish, although there are sides to me which are more Jewish culturally, involving the arts and music."

He was taught to play chess by his sister, Lilit, at the age of nine. His first coach was the Grandmaster Melikset Khachiyan. An early sign of his ability came when he won the 1994 World Youth Chess Championship (under-12) in Szeged with 8/9, ahead of future luminaries Étienne Bacrot, Ruslan Ponomariov, Francisco Vallejo Pons, and Alexander Grischuk.

Aronian holds a diploma from the Armenian State Institute of Physical Culture.

Aronian broke the 2800 rating barrier in the November 2010 FIDE world ranking with a rating of 2801. He is the sixth player to cross the 2800 rating mark, after Garry Kasparov, Vladimir Kramnik, Viswanathan Anand, Veselin Topalov, and Magnus Carlsen.

(Rapid, blitz and blindfold games not included; listed as +wins −losses =draws as of 18 November 2015.)
Players who have been World Champion in boldface 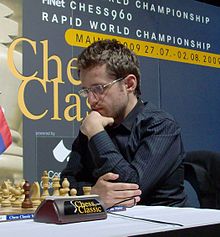 In 2007 he successfully defended his title of Chess960 World Champion by beating Viswanathan Anand. He lost the title in 2009 to Hikaru Nakamura.

Viswanathan Anand called Aronian "a very gifted tactician", and said that "He's always looking for various little tricks to solve technical tasks." In 2011, Boris Gelfand described Aronian as "the most striking player around, with the highest creative level, in terms both of openings and original ideas in the middlegame."

As white, Aronian plays mainly 1.d4. According to Anand, "Though he opens with 1.d4, he treats these positions like an e4-player." Aronian is an expert in the Marshall Attack.

Aronian's handle on the Internet Chess Club (ICC) is "L-Aronian".

Aronian has been in a relationship with Australian Woman International Master Arianne Caoili since 2008.

The threat of back-rank mate is crushing.