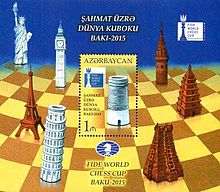 The Chess World Cup 2015 was a 128-player single-elimination chess tournament held in Baku, Azerbaijan, from 10 September to 5 October 2015.

Sergey Karjakin won the competition on tie-breaks after a four-game final against Peter Svidler. Both finalists qualified for the 2016 Candidates Tournament.

Matches consisted of two games (except for the final, which consisted of four). Players had 90 minutes for the first 40 moves followed by 30 minutes for the rest of the game with an addition of 30 seconds per move from the start of the game. If a match was tied after the regular games, tie breaks were played the next day. The format for the tie breaks was as follows:

The qualified players are seeded by their FIDE ratings of August 2015. Eighteen players qualified by rating. All players are grandmasters unless indicated otherwise.