Ni Hua (born May 31, 1983 in Shanghai) is a Chinese chess grandmaster and the national team captain. He is three-time national champion. In 2003, he became China's 15th Grandmaster at the age of 19. On April 2008, Ni Hua and Bu Xiangzhi both became the second and third Chinese players to pass the 2700 Elo rating mark, after Wang Yue.

He was a member of the gold medal-winning Chinese team at the 41st Chess Olympiad.

In 2000 he played in his first Olympiad in Istanbul, where he scored 5.5/9. In February 2000, he gained his first GM norm at the 1st Saturday GM Tournament in Budapest with 7/10 score. He achieved his second GM norm at the April 2001 China Team Championship in Suzhou with a score of 6.5/10. His third GM norm was achieved at the Tan Chin Nam Cup with a score of 6.5/9 in Qingdao in July 2002. In the 2001 China-USA Summit Match, Ni Hua scored notable victories against Dmitry Schneider and Hikaru Nakamura.

Ni was awarded the Grandmaster title in February 2003.

In August 2004, Ni won the 1st Dato’ Arthur Tan Malaysian Open in Kuala Lumpur. In the FIDE World Chess Championship 2004 he beat Evgeny Vladimirov in round one, but was put out by his compatriot Ye Jiangchuan in the second round. 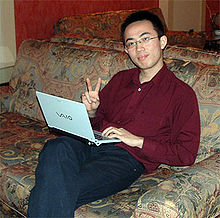 In November 2005, the Chinese national team just needed one point to win the championship in the World Team Chess Championship in Beersheba, Israel, but Ni Hua's two endgame losses (to Karen Asrian of Armenia and Alexander Morozevich of Russia) in the final two rounds allowed Russia to clinch victory. Later that month, he competed in the Chess World Cup 2005, where he was knocked out in the first round by Vasilios Kotronias.

In the 37th Chess Olympiad, Ni scored 5.5/9 on fifth board helping the Chinese team to win the silver medal, China's first medal ever at men's Chess Olympiads. In September 2006, he finished equal first along with Bu Xiangzhi in the World University Championship, but placed second on countback.

In early September 2008, he competed for team Mérida Patrimonio on board three at the Division 2 - CECLUB Spanish Club Chess Championship. His team mates were Dmitry Jakovenko, Pavel Eljanov, Zoltán Almási, Ibragim Khamrakulov and Miguel Llanes Hurtado. Ni Hua scored 4.0/5 (+3 =2 -0) and his team topped the group. In late September 2008, he competed at the 5th Russia v China Match in Ningbo, where he scored 2.5/5 with a performance rating of 2700 for the men's team (with Wang Yue, Wang Hao, Bu Xiangzhi, Li Chao).

In April 2010 he won Asian Chess Championship in Subic Bay. This achievement earned him the qualification to the Chess World Cup 2011, where he was knocked out in the second round by Ruslan Ponomariov.

In March 2012, Ni Hua came first in the 2nd HDBank Cup tournament in Ho Chi Minh. In the subsequent month, he won the 14th Dubai Open scoring 7/9 and edging out on tiebreak Baadur Jobava, Mikheil Mchedlishvili, Normunds Miezis and Sandipan Chanda. In June of that year, he tied for first with Bu Xiangzhi in the 3rd Hainan Danzhou tournament after both scored 6/9, and finished second on tiebreak.

In May 2013, he tied for second place with Bu Xiangzhi in the 4th Hainan Danzhou tournament and finished third on countback. In August 2013, Ni won the 3rd Chinese Rapid Chess Championship in Shenzen.

In July 2014, he won the 22th Montcada Open. In the 2014 Chess Olympiad in Tromsø, he contributed to China's historic victory scoring 6.5/9 on fourth board. In November 2014, he helped the Chinese team to win the Scheveningen-style match against the Romanian olympic team at the 8th King's Tournament in Mediaș.

He took part in the Chess World Cup 2015, where he was knocked out in the first round by Argentine GM Sandro Mareco.