He has been a second/assistant for Wang Yue on several occasions, and both are good friends having known each other since they were children.

Li Chao started to play chess at the age of six.

In 2005 he finished sixth at the World Junior Chess Championship held in Istanbul. In August 2007, Li won the Scandinavian Chess Tournament in Täby, Sweden with 8½ points out of 9. In September 2007, he won the fourth IGB Dato' Arthur Tan Malaysia Open in Kuala Lumpur. He won the President Gloria Macapagal Arroyo Cup in Manila held on 21-29 November 2007. 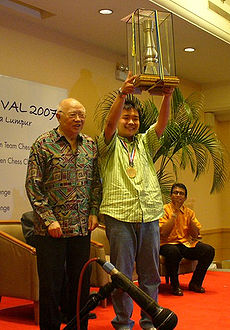 In 2007, he was awarded the Grandmaster title. His GM norms were achieved at:

In April 2008, he came equal first with 7/9 points and fourth on tie-break at the tenth Dubai Open. In May 2008, he came joint first on points (8.0/11) and first on tie-break at the second Philippine International Open in Subic Bay Freeport Zone. In August 2008, he won the fifth IGB Dato' Arthur Tan Malaysia Open with 9/11. In the following month, he competed at the fifth Russia v China Match in Ningbo where he scored 3/5 with a performance rating of 2767 for the men's team (with Wang Yue, Wang Hao, Ni Hua, Bu Xiangzhi).

In the Chess World Cup 2009, held in Khanty-Mansiysk, Russia, he reached the third round losing to Vugar Gashimov, after he didn't show up in time at the second game of the rapid tiebreaks, as he was smoking, and was forfeited.

At the 2011 Tata Steel B tournament he scored 6/13, placing ninth. Li won the chess tournament of the 2011 Summer Universiade in Shenzhen with a score of 8,5/9, two points ahead of the field, including compatriots Wang Hao and Wang Yue. In October 2011, he won the Indonesia Open Chess Championship in Jakarta on tiebreak over Ganguly Surya Shekhar. Li took part in the Chess World Cup 2011, where he was eliminated in the first round by Nguyen Ngoc Truong Son.

He tied for first with Yu Yangyi at the 2nd Indonesia Open Chess Championship in 2012, but placed second on tiebreak. Li won the 2013 Asian Chess Championship in Manila and this achievement earned him the qualification for the Chess World Cup 2013. In the latter he defeated Evgeny Postny in the inaugural round to reach the second one, losing to Anish Giri. In 2014, he won the Reykjavik Open with 8.5/10.

In March 2015, he won the 31st Cappelle-la-Grande Open. This success was followed by the victory at the 19th Neckar Open in Deizisau with a score of 8.5/9. In August 2015, he played a six-game match with Hungarian Grandmaster Peter Leko in Szeged, Hungary. He won the match by 4-2 (+2-0=4). Li played for the team "Siberia" (alongside Vladimir Kramnik, Levon Aronian, Alexander Grischuk, Wang Yue among others) which won the 2015 European Club Cup in Skopje.