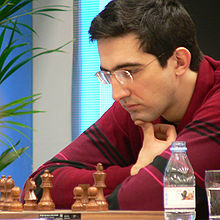 The Chess World Cup 2013 was a 128-player single-elimination chess tournament, played between 11 August and 2 September 2013, in the hotel Scandic Tromsø in Tromsø, Norway. It was won by Vladimir Kramnik, who defeated Dmitry Andreikin 2½-1½ in the final match. The finalists qualified for the 2014 Candidates Tournament.

Matches consisted of two games (except for the final, which consisted of four). Players had 90 minutes for the first 40 moves followed by 30 minutes for the rest of the game with an addition of 30 seconds per move from the start of the game. If a match was tied after the regular games, tie breaks were played on the next day. The format for the tie breaks was as follows:

The participating players were seeded by their July 2013 FIDE ratings:

All players are grandmasters unless indicated otherwise.

Magnus Carlsen, Viswanathan Anand, and Veselin Topalov qualified for the event, but they declined to participate. The only other player from the world's top 30 who did not participate is Ding Liren. Levon Aronian (who declined to play in 2009 and 2011) and Vladimir Kramnik (who had never played in a Chess World Cup) chose to participate because FIDE made participation in either the Chess World Cup or the FIDE Grand Prix series mandatory for qualification to the 2014 Candidates Tournament through rating.